Fashion always comes back around

I was reading Dress in Eighteenth-Century Europe by Aileen Ribeiro and A Lady of Fashion: Barbara Johnson’s Album of Styles and Fabrics today and realized that the Brunswick was the 18th century version of the modern day hoodie. Lol. Okay, so maybe it was quite a bit dressier but I don't think I've seen a single painting or sketch where the hood is actually UP on the Brunswick...ladies sort of went around in these previously-meant-for-traveling ensembles no matter what the occasion, just like I go out to the store or to a movie in a hoodie that was meant for athletic wear, and never put the hood up. 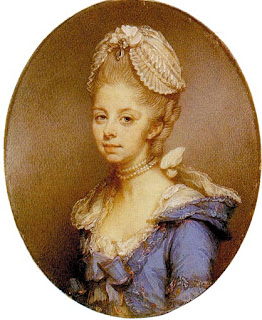 Would anyone seriously wear this gorgeous frilly hooded thing outside? I don't think so.

My sleeves aren't looking right on the pink gown. They almost have a puffed sleeve effect going on at the top near the shoulder, which I HATE, but if I decrease the fabric up there, it's almost too tight to get my arm through, and I do not have fat arms in the least. I'm really puzzled. After looking at some paintings and sketches though, I think the sleeve as it stands with the little pleats more toward the gown's back is probably acceptable, even if I would like a smoother silhouette. Boo. Fabric never behaves the way I want it to.
Posted by Anna at 4:30 PM