I went to a benefit event for the Fort in my blue jacket, new maize petticoat and sky-blue Georgies (from American Duchess) and it ended up being the nicest event I have done yet, because it was smallish reenactor-wise (compared to the hundreds at summer Rendezvous) and a number of the people who had bought tickets to attend were very curious about the reenactors and what they were doing. I was asked numerous times about my outfit, what I was sewing (a haversack), what I knew about the Fort and the area's history, etc. I think it was a great deal more enjoyable to go by myself (usually I'm with a very, well, shall we say extra-talkative gentleman-friend) because it made me a little more approachable and I got the chance to share some of what I do and know and I really loved being informative instead of just decorative. Hopefully I'll get to do this a lot more often!

Alright, enough of the text stuff...time for a few pictures... 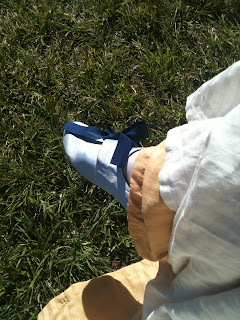 Oh my Georgies, how I love them. I dyed them that very morning with Tulip powder dye in Royal Blue, just one coat, and it went on like a dream. I might add a couple of more coats eventually though, but I wonder if that's going to be difficult since I did scotchguard them. They have a leeeetle bit of grass staining and wear from gravel now but that's no biggie, I don't want them to look totally pristine. Nonetheless I am going to reserve them for more indoor/clement weather events once my leather Devonshires get here (which I'll probably dye an ivory/cream). The Georgianas are SUPER comfortable, even with the heel, even more-so than some of my tennis shoes. I am not even embellishing the truth. They felt like slippers for the eight hours or so that I wore them. I need to get buckles for them. Everyone was dying to know where I got them, even non-reenactors, and a couple of people even wrote down what I told them so hopefully Lauren will get a few more customers out of me. 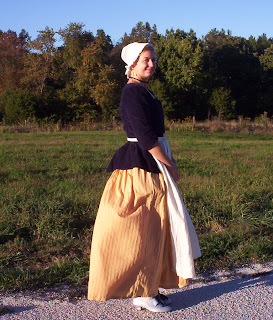 I stayed in my outfit after the event to take pizza over to my parents' house (bet that's the weirdest pizza delivery costume anyone's ever had) and my momma took a few pictures of me. I have on a chemise, stays, a very girly pink and white striped under petticoat, and what you see. It looks really poofy here but that's just the wind blowing it...I was pleased because I wanted some pouf, but not high-French-fashion pouf as I don't feel that the early settlers of the Illinois country would have been wearing panniers or bumrolls for anything other than a dance or possibly church. 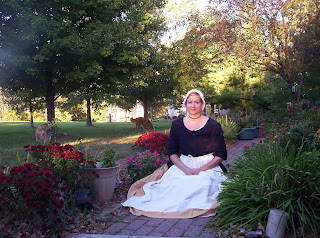 Our dogs don't care how cute I looked. Philistines. Actually they barked at me when I got out of the car because they were so nervous about me in an outlandish get-up. Oh well.
Posted by Anna at 4:43 PM