Next weekend is the biggest 18thc event around here, so I have been hurriedly throwing some last-minute things together for other people. My gentleman-friend now has three pairs of breeches, two I sewed myself (baggy, saggy, but at least he won't be running around in a loincloth, ugh), and the other...was formerly an unspeakable atrocity. I should have taken some before pictures but I was sure it wasn't savable. 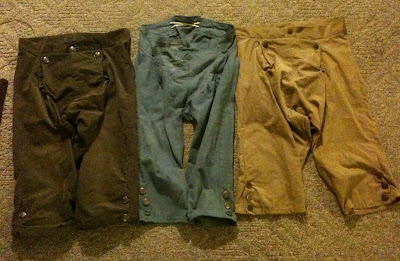 The breeches in the middle began their life as a canvas pair of long trousers, only they were the skinniest trousers I have EVER seen...like the 18thc equivalent of skinny jeans. Also, at one point, they had been dyed with a walnut stain, only over time they faded to a delicate pastel shade of pink. 18thc pastel-pink skinny jeans. And to top that off, they had stains and light patches and a blown-out posterior from a sudden skid down a hill. But for the heck of it, I thought "at least he'll have a bum-around pair to cook in instead of ruining the nice corduroy ones I made" so I cut them off, dyed them with some random powder-dye from Walmart, and while I wish they had stayed the rich dark blue that they were before a rinse and a wash, I have to say that the dusty blue is an improvement on pastel pink. The splotches and stains aren't gone but he's delighted. I even sewed some non-functioning buttons on the sides.


Then I also unwisely promised a friend that IF I got the chance, I'd try to whip up something for her to wear if she came down for the day, so she gets a purple ensemble. 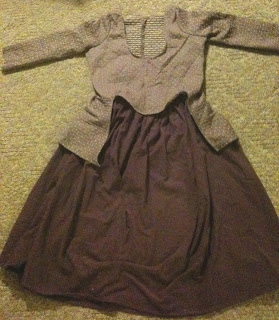 Lovely former lavender drapes on top, darker purple bedsheet skirt on bottom. There was no way I was going to buy fabric from anywhere but the thrift store if it might not even get worn! 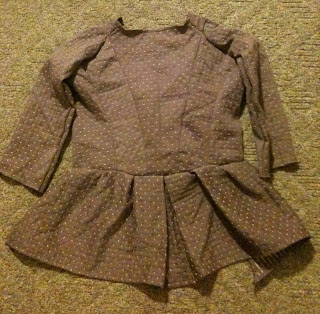 Yeeeahhh I don't really know what that is. It's a rare caraco-shortgown-jacket. Good thing my friend doesn't know the slightest about accurate clothing.

And this week, I got some lovely things in the mail, all the fault of Lauren over at American Duchess, as usual. First off, an "imperfect" pair of silk Georgies (pfft, looked fine to me) that I dyed a lovely light pink. Then some petersham ribbon from The Sewing Place in "misty blue" and "peach blossom" to bind my two silk pairs of shoes with, as Lauren demonstrated on a pair of her Regency shoes a while back. It is SUPER easy. I just picked up an Aleen's craft glue pen from Walmart and applied it to the petersham ribbon in small sections, which you then press down onto the shoe and kind of stretch and smooth and pinch it to make it "stick." With the blue shoes, I didn't have faith that the glue was sticky enough so I carefully paperclipped the ribbon to the shoe, and ended up with weird wire indentations all along the ribbon binding. I went ahead and just trusted the glue on the pink shoes and they turned out fine. 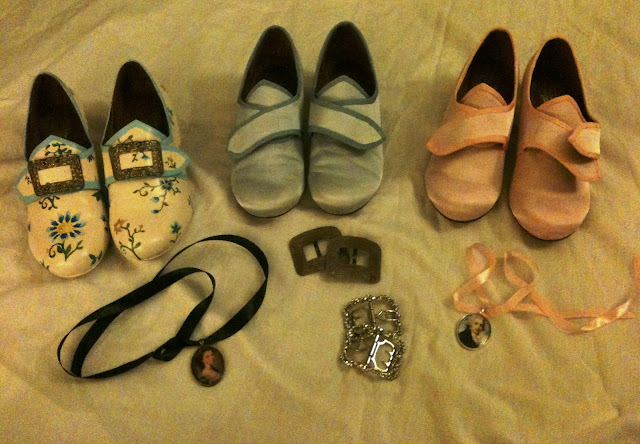 Accessories galore. I wish all my shoes could sleep in bed with me, I love them THAT much. 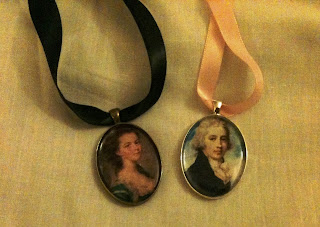 Aww. Imaginary sweethearts. The guy is a total historical hottie.

So that is what I've been up to lately...unless I miraculously get time this week to dress up in what I'll be wearing next weekend, I probably won't post until I get time to go through my photos after the event...so excited to finally wear all the things I've been working on over the past year!
Posted by Anna at 10:55 PM