So I'm making decent progress on Mr. E's striped coat (I guess it's...erm...1750's...ish? We'll pretend like Simplicity patterns actually have historical dates they're aiming at) but it's buttonholes next, which I am NOT going to do by hand, forgeeet that, not for a man-coat. If he protests, I'll tell him to do his own darn buttonholes. Then I just have pockets to put in it and it'll be done, hopefully in time for his birthday on the 7th. I'm also plugging away at a boring off-white petticoat for the HSF "Under It All" challenge, and that's coming along easily since I've made a number of them. I don't want to put up any progress pics yet, but I will stick up a couple of other things because all posts need photos!


First off is the lovely little teapot won in the giveaway from Sew18thCentury...Thank you so much, dear fellow blogger! I am quite in love with it and am enjoying how it looks on my dining room table with my pewter and china! My mother came over and I was hard-pressed to keep her from taking it home with her, she was so charmed by it as well. 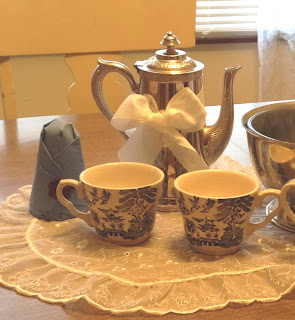 And also I realized I never did put up a picture of the matelasse pockets being worn, so just a quickie of cream and pastel goodness...the pockets are bigger than my previous ones which is great because I have manhands and also like to carry a lot of un-period-correct junk around. 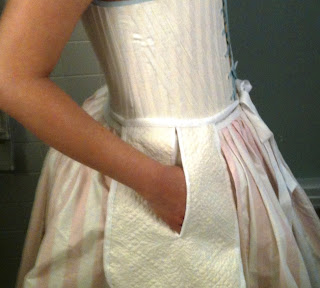