Oooooh I didn't know if I'd get to post about this gown in this order, but the professional photography came back sooner than I was anticipating. This was such a fun dress to make!

To begin its tale, I have to go back to something that's been brightening each week up a bit since The Plague began.... the "Fancy Styles Fabric Shows"! They aren't the cheapest silk purveyors out there, although they do occasionally have some shot taffetas that I can't even find in a particular color combo from Silk Baron or Renaissance Fabric so it's worth it for some of the unusual ones. But they started doing Instagram Live shows earlier this year when everything was shut down, and it is just a delightful joy to see the silks being rustled around on camera while the live-chat is full of amusing comments and the hosts are as obsessed with fabric as the rest of us. And the best part of all is that they do such generous silk giveaways! At first they were giving away 5 yards to one winner every show, but most recently they do that PLUS random 1-yard giveaways throughout the hour. Check their instagram @fancystylesfabric for details...this is not sponsored, I'm just a fan, lol!

So on one of the early lives I was sitting beside my husband on the couch toward the end of the show, enjoying the silks, and I commented jokingly to him "They're going to announce the winner in a second...but you know I never win anything so it won't be me" and they called MY name! I was so thrilled. The prize that day was 5 yards of a pre-picked pastel-striped silk taffeta lovingly dubbed "the ice cream parlor" for its tastiness, although I think it looks more like a box of macarons! I went ahead and bought an extra yard for trim. 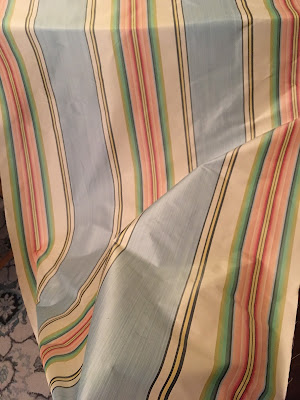 I wouldn't say I've seen any 18th century extants like this stripe, it's quite wide...but to my surprise when it arrived I really fell in love with it! There's a faint iridescence to it that really makes each color lovely up close, so it was an absolute joy to work with. 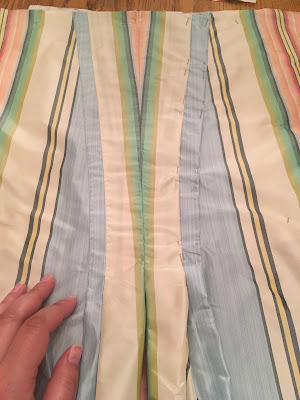 Since I had just 6 yards I decided to do a robe a la anglaise, and while I've drafted my own in the past, to take some of the guesswork out of the process I decided to use the Larkin & Smith English gown pattern. What a dream. It went together SO quickly and easily. 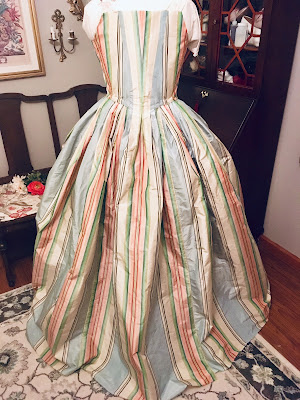 Taking shape! I just love the lightweight loveliness of a good crisp taffeta. So beautifully weightless over the right supports. 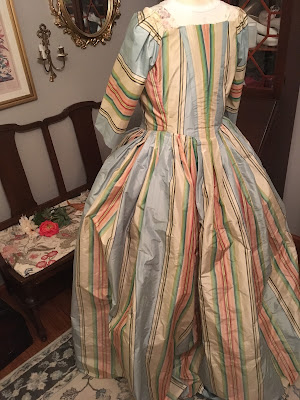 The sleeves off the Larkin & Smith pattern were extremely foolproof as well. I don't think I had any of the pinning and repinning that I always seem to have to do with 18thc sleeves on other patterns. 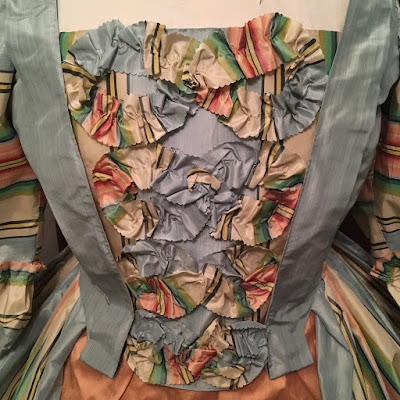 I wasn't sure what to do about the stomacher trim, and settled on a simple figure-8 pattern that looks much more complex than it actually is, since cutting strips across the stripes and gathering it really adds to the 'busyness' of what's going on, and almost has a floral effect in my opinion. 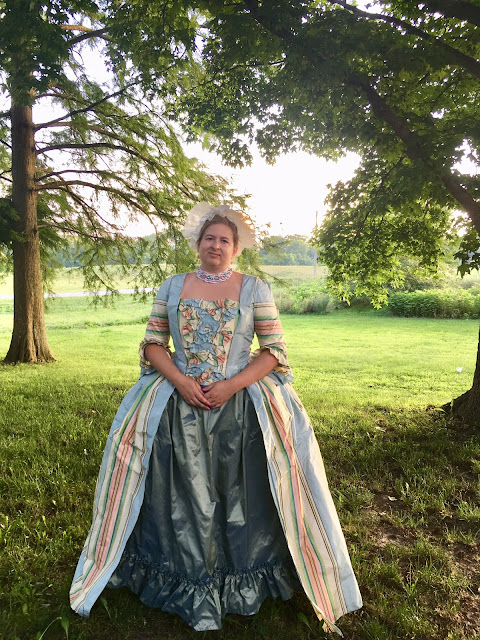 These photos were taken this summer when I *thought* had the gown trimmed as much as I was going to, so I quickly threw it on with an aqua petticoat and died of heat exhaustion for the 15 minutes I was out in the August heat (never again. Linen or light cotton for summer all the way, lol!). 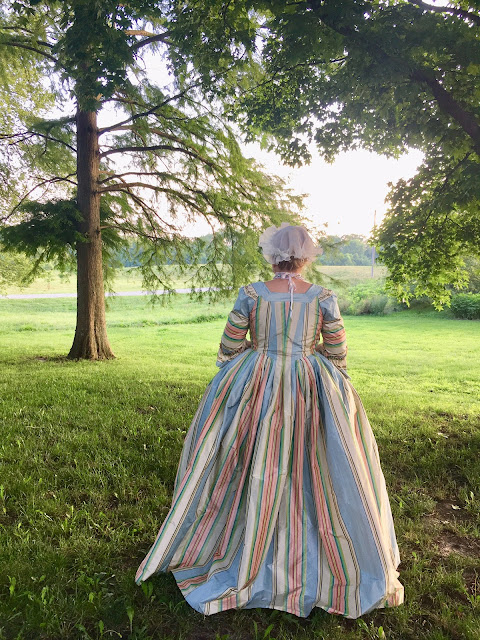 I had ordered another yard even after the gown was done to add some serpentine trim on the robings and down the gown skirts, but had given up on it ever arriving when it went missing for 3 months...much to my shock it finally showed up out of the blue one day! So I trimmed it out for maximum floof, and figured I'd just bide my time until the day I actually got to wear it for an event to get pictures.

Then a friend contacted me to see if I would be interested in doing a photoshoot in October, so actual photos of it in all its trimmed out glory DID happen before 2021! And here it is! 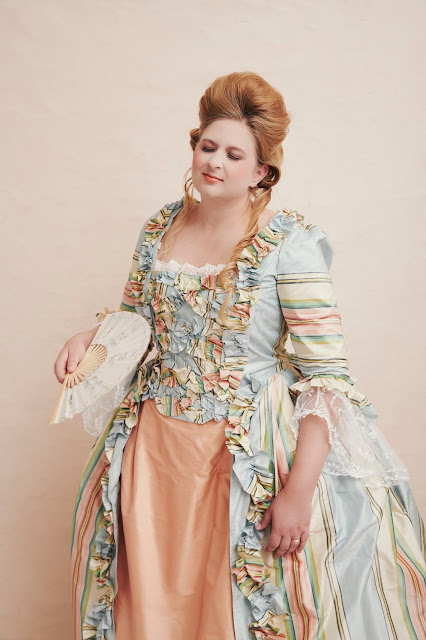 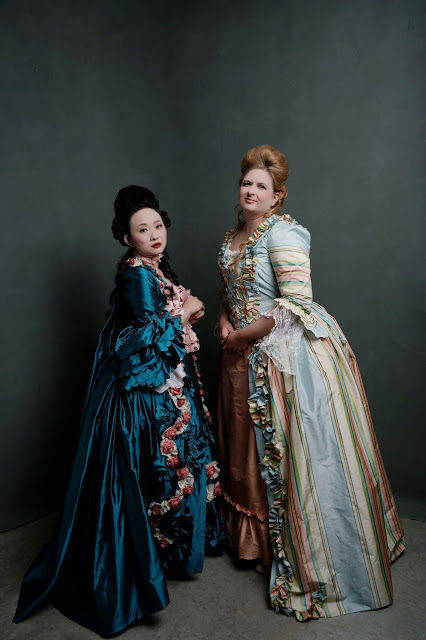 And a lovely shot of our gowns together -- Christine had done her version of the famous Madame de Pompadour gown. Everyone on the photoshoot was masked, except us during the few minutes of shooting, and we had been isolating ourselves as much as possible before this, in case anyone is freaking out, lol.
And that's it til next time, when I really will get around to the pictures of the Mantua!