Just when you think you've seen it all...

You know, I have come to the conclusion, after doing a great deal of reading and clicking and examining in extreme newbie desperation to nail down some hard and fast rules of 18th century clothing, that there are no rules. I have read and heard from self-proclaimed "veteran" re-enactors that solid browns and blues and yellows were about the only colors and linen about the only fabric available to colonists in America and should be the only colors worn at events. Interesting that extant wills from the area I reenact in (French Illinois territory, about as "on the outskirts" during the 18th century as you can get) list some of the inhabitants as having green and pink silk gowns, stockings and shoes, even though the families were mostly farmers and trappers. And then all over reenactment websites and costuming books, I have read that no 18th century woman in her right mind would have ever created or worn a gown out of the very picturesque Toile de Jouy fabric that was used for bedhangings and drapery. Well.... 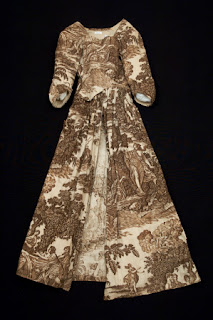 Granted, it is bizarre-looking, late in the century, and I wouldn't be caught dead in it, but it exists. If you are absolutely desperate to wear your drapery to a late 18th-century event, you now can do so and wave this picture in the face of all the finger-pointers.

It makes sense that there's particular commonalities and details specific to various decades within the 1700s, as well as regional differences, and there do seem to be a number of universally accepted facts about material, print and color that are borne out in existing pieces of clothing. However, if your fabric meets the major qualifications, unless you're using something way off base like My Little Pony quilting fabric or 1970s green, orange and brown floral couch fabric to make your gown (and even then there were some remarkably hideous almost "70s"-looking patterns in the early 18th century) nobody can with perfect accuracy say "that pattern would never have been used on fabric back then" or "they would never have constructed a gown with seams in that fashion." I keep finding astonishing exceptions to the so-called "rules" that a lot of re-enactors seem to have laid down. And yes, perhaps in many cases, these extant gowns/jackets/petticoats/hats were just that: exceptions. One of a kind mishaps or lapses in judgement or just plain making-do with the only materials they had. And when you think that none of these clothes came out of an industry or factory that was standardizing them, and each mantuamaker would have been taught certain basics but had their own preference for how to do things, it makes sense that a great deal of variation existed. The fact is that they DO exist and if you really want to justify your decision with an obscure example, why the heck not?  As long as we aren't trying to make sweeping generalizations and are willing to talk about the uncommonality of an item, I think it's important to appreciate the variety necessitated by the unregulated circumstances under which clothing was made.

Also, a few hapless seamstresses or tailors occasionally accomplished some unbelievably hideous stitchery and seams back then. I feel better about mine.
Posted by Anna at 5:28 PM