This little outfit has been done for a while and worn a couple of times now! I drafted it myself from another Regency gown I had made, and it's quite basic in shape. I also made a navy spencer out of a very small yardage of wool from the Laughing Moon  LM129 - 1798-1809 Ladies’ Regency Wrapping Front Spencer pattern and it was super easy so I'm sure I'll make more of that pattern eventually. 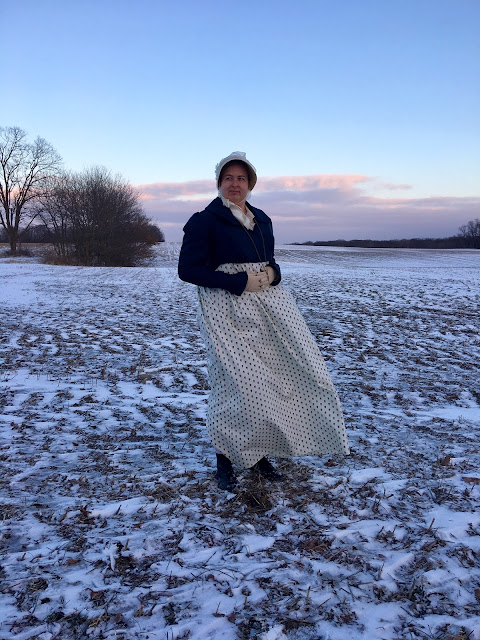 The little dress shoes were a thrift store buy if I remember correctly, and they have a funny little cut-out that was the perfect place to tie a white bow. 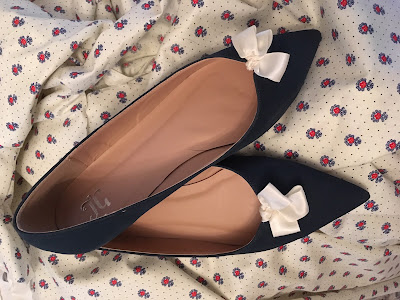 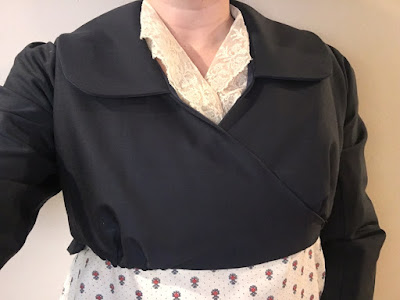 Front and back of the spencer -- loved the little ruffle, but you can also leave it off. 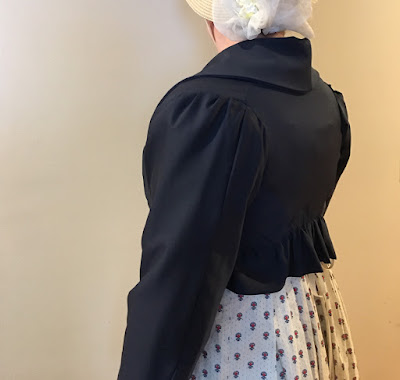 Eventually I hope to get some Regency winter boots from American Duchess, but ran across these inexpensive ones on Amazon and they work great, even if I wish the toe was a bit more pointed. I wanted to take some quick pictures so I left the regular laces in, but plan to lace them with thin black grosgrain ribbon instead for a prettier look. 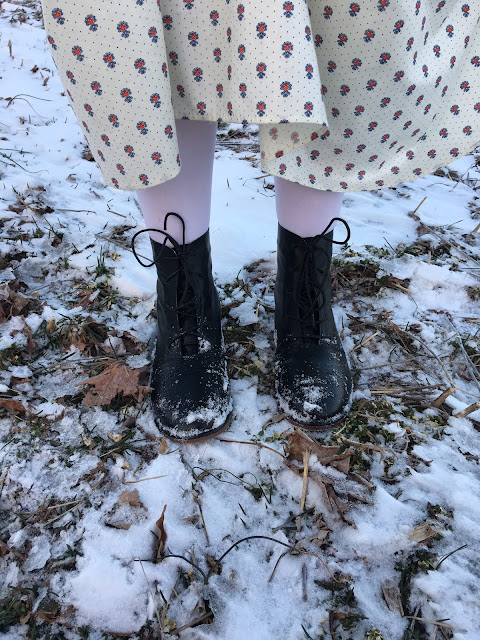 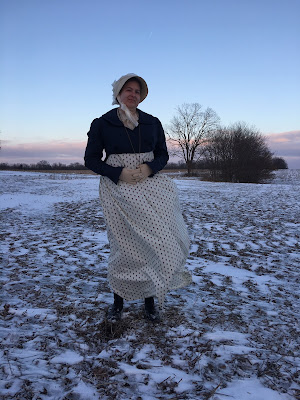 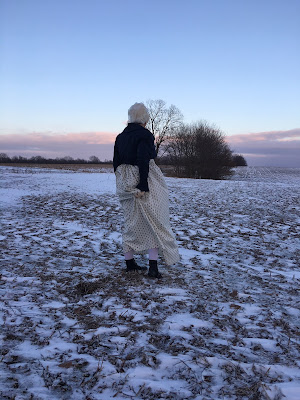 Can't take a real Regency shot without at least one classic 'wedgie' like the fashion plates, lol. I was losing the light a bit here but it's kind of 'romantic desperation on the icy moors', right?

The next time I wore the gown was by itself, at a delightful tea party where we went for an 'era free-for all'! Loved the different outfits that came out to play that day. 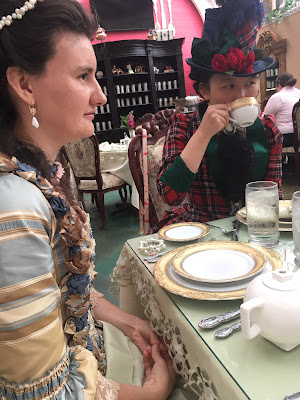 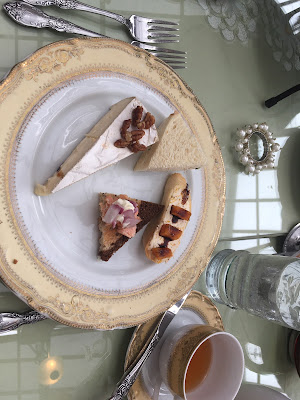 Some of the delicious food offerings 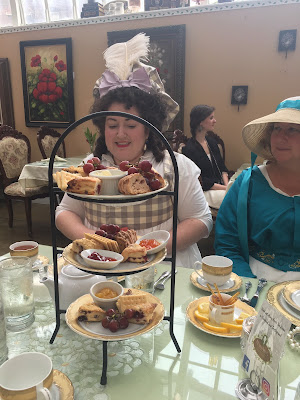 Just look at that tower of treats! 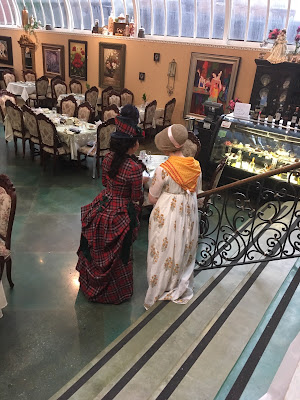 Christine and the 'other' Sara 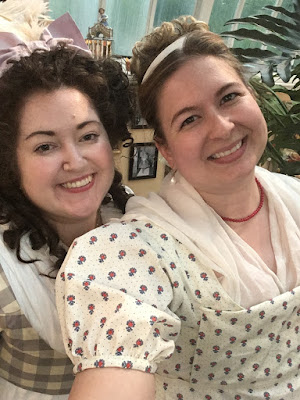 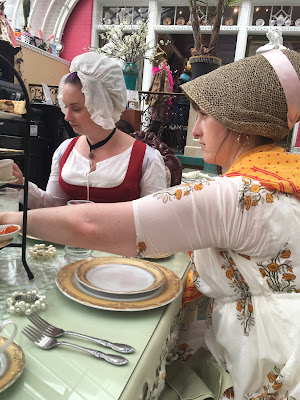 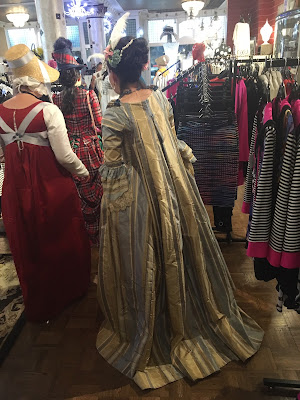 Here we have three eras -- 18th century, Regency, and Victorian! 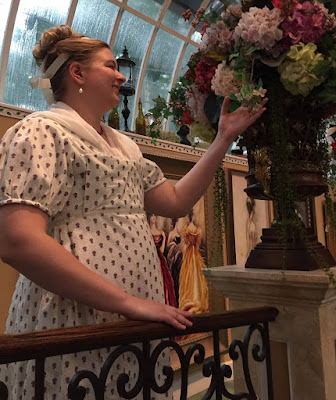 You can see here that this is just a plain bib-front, nothing fancy.


And just recently I wore the gown and spencer out again to the Saint Louis Jane Austen Fest, a weekend of lectures about Austen's works, with all kinds of other activities.
Kim and I managed to squeeze in a lecture and a tea. I wrapped a scarf around my head to approximate a turban because I didn't feel like re-trimming my only bonnet, which has a summer look going on right now. 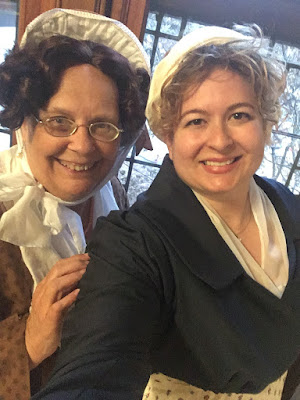 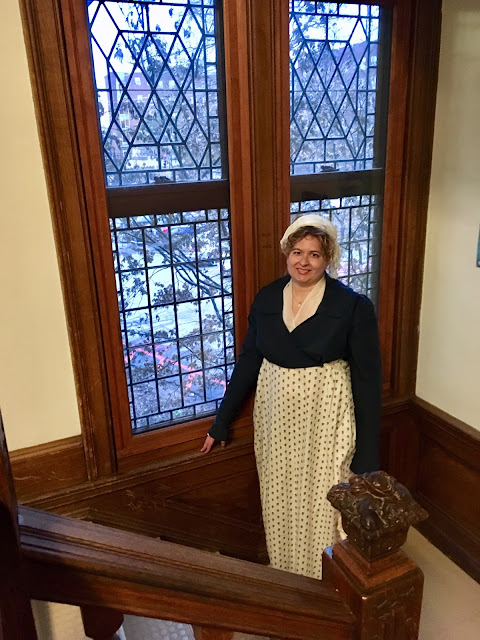 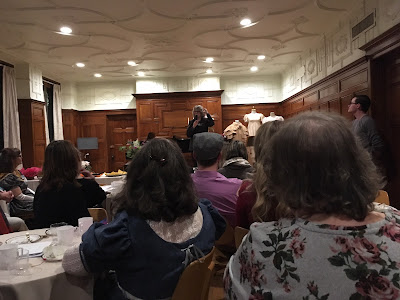 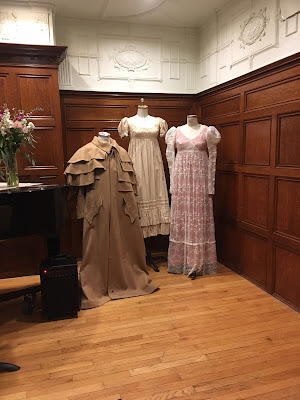 And during the Tea we signed up for, we got to hear a little lecture from the costume designer of the play we went to that evening at the Repertory theater...Pride & Prejudice! Always interesting to hear how designers for the stage think through historic styles and adapt them to both the characters and the necessities of the stage. These were some of her designs on display.

The stage itself was GORGEOUS when we got to the theatre. I was obsessed. And they had the most amazing mesh panels on both floors that could be either opaque or see-through, depending on the lighting. They also projected period paintings within the gold frames, or large-scale film clips of action happening between scenes in the interest of time-saving and condensing. 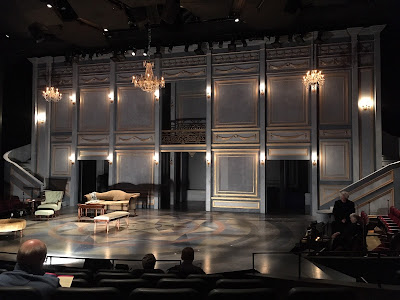 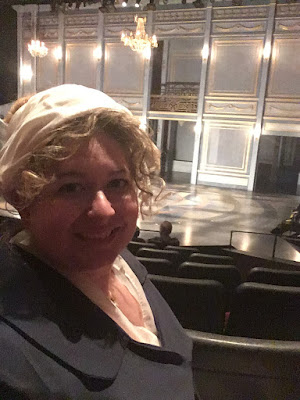 And this picture I did not take because of course it's terrible theatre etiquette to take pictures during the performance -- I stole it off the Rep's website and photo credit goes to Philip Hamer. 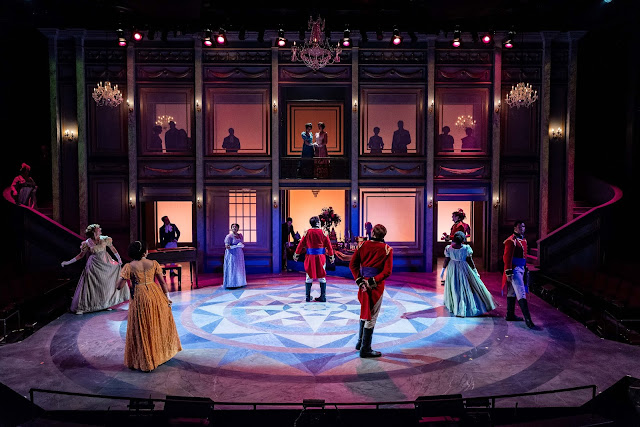 I was super impressed by all the actors, and the whole thing was just visually gorgeous. What a great evening this was! At the end, they had the 'hall' decorated for Christmas, and 'snow' fell from the ceiling onto the actors and within the audience...so pretty and festive!