I wear so much black in everyday modern life that my poor mother, when we see each other, is always bringing me colorful clothes she's found, trying to spice my work wardrobe up. Oddly though, I'm not drawn to black at ALL in historical clothing! There are many philosophical inferences that could be pulled from that dichotomy, but I needed a black gown for Tea at the Haunted Mansion at Costume College this past summer so one had to be made.

My friend had a black silk faille that she had no intention of using, and gifted it to me! I had just enough for a sacque, a little bit of trim, and the front panel of the petticoat which is perfect and HA because the Georgians, never ones to waste expensive silk, often used a different and cheaper fabric on the back panel of the petticoat where nobody would see it.

It's quite hard to see any detail on this gown as the faille is not nearly as light-reflective as taffeta, so I opted to keep the trim confined to the stomacher. 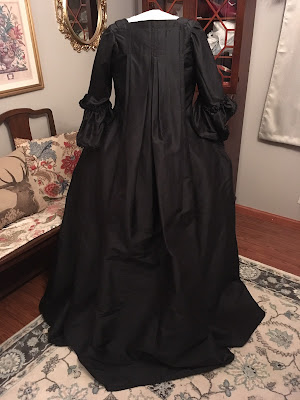 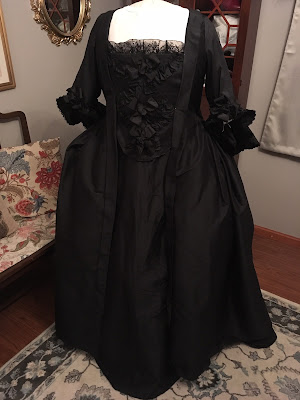 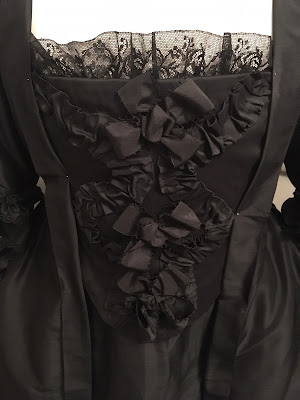 Black lace, as far as I know, would have been very uncommon around the neckline/stomacher edge of a gown in the 18th century. I'm not sure I've ever seen an example of it, although black lace is used elsewhere.  But the vintage lace I found just looked so charmingly funereal yet elegant that I couldn't resist! 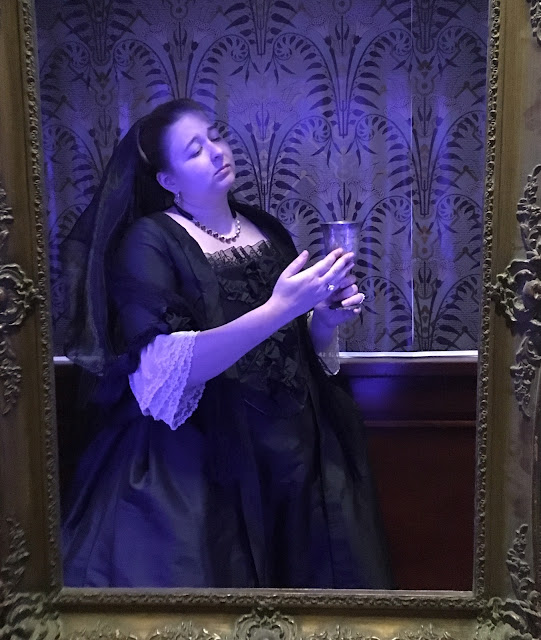 They had some gruesome and gothic photo-shoot setups where you could take selfies at the Tea, and I enjoyed looking tragic as much as possible. Here's me about to depart this world by drinking out of a poisoned chalice, or something. 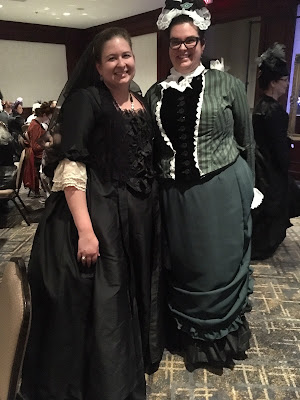 I finally met up with the delightful Taylor, a friend I had only ever talked to on Instagram before, and she is just a hoot in person, I hope we get to hang out at other events some time! 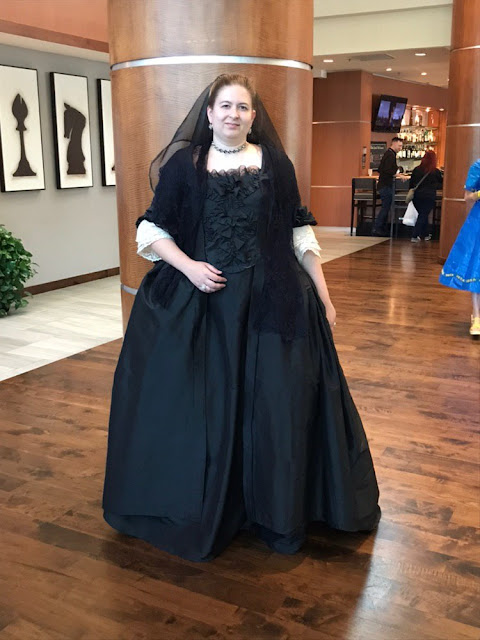 I re-wore my black veil from my Gala costume the night before, and it only added to the grieving widow look, lol. At least I have an 18th century mourning gown now! The one thing I look back on with this dress and want to change (and will) is that the petticoat ended up being longer than the gown, and I HATE HATE HATE that look on myself, so that petticoat will be getting shortened! The one thing I have learned is that J.P. Ryan must not be a tall lady. I'm 5'9" and both my sacques from her pattern have been too short in the gown's front panels and I think it's due to the suggested measurements (or it could just be me. It's been a minute since I really looked at the pattern). Luckily you can't tell it as well on my bronze sacque because I dipped the serpentine trim down quite low on the front edges.