I am so, so happy with how my first ever entirely hand-sewn, drafted-from-books gown turned out. It taught me some important lessons along the way, like "don't use extremely heavy upholstery fabric for a gown that would have been made out of silk" but I'm broke and Hancock Fabrics' decorating clearance is impossible to pass up. 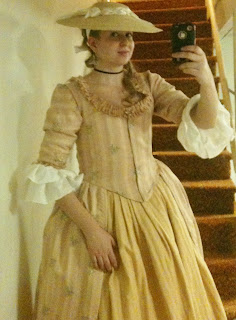 I took a few photos with my phone before I remembered I still had a digital camera...this is kind of grainy but even with poor resolution the silhouette is very elegant. Our clothes nowadays are so unflattering compared to the 18th century. I'd wear this all the time if I could get away with it! 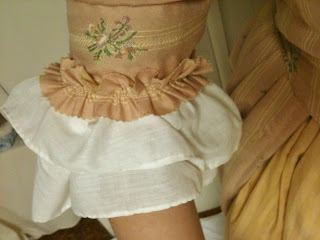 I did self-fabric trim with ordinary pinking shears...I haven't got the scalloped shears yet, maybe eventually, but I do know that there are some extant gowns that have the straight pinking.

The bodice is closed with hooks and eyes, which I'm assuming is historically accurate as it showed up in Janet Arnold's patterns. Still not a fan of the puffy sleeves but the fabric was too thick and inflexible to lay down nicely at the shoulder. Next time, next time. 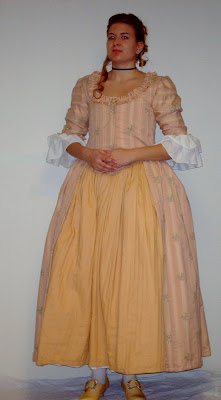 I'll post about the shoes with some pictures eventually...they are of course the leather Devonshires from American Duchess with her Fleur buckles. I was so terrified to punch holes in them and kind of felt bad when it was done but of course the buckles are so worth it.

No, I'm not wearing my fichu (and yes, I'm going to call it a fichu instead of a neck handkerchief, because the area I reenact in is French in heritage), I should have been proper and stuffed one under my neckline but it was upstairs and I was lazy. Also I would like to eventually make a fancy, somewhat decoratively short whitework apron to go over this but I don't feel like it's imperative.

Doing my hair was a lot of fun...it reaches almost to the small of my back now so there's plenty to work with. I poufed up the front and bobby-pinned it, then kept making smaller loops and twisted sections and pinned them haphazardly, leaving a couple of pieces loose to curl with the curling iron. Unfortunately with no electricity at the fort, I won't be able to get it to look like this at reenactments most of the time (plus the summer humidity this past year was so disgusting that a crisp piece of paper went limp and soggy within five minutes...curl would have been impossible). But for a first time attempt it looks pretty decent. 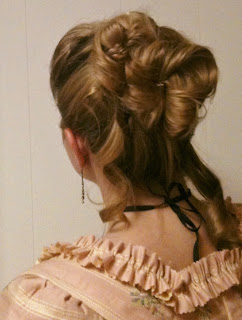