Rendezvous was great fun this year albeit extremely (as in record-breakingly) hot. 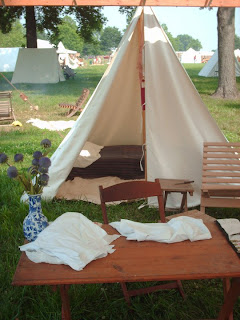 My tent is teeny tiny but I wasn't about to pay a ton for a larger tent I didn't need; nobody even spends time in them during the day because they are SO HOT. Even in the shade, it's much cooler to be outside under the canvas fly than it is inside the tent. I was sewing a shirt here at the dining table but I kept getting interrupted so it still isn't finished. 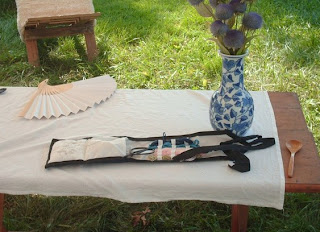 There's my little hand-made housewife after the pattern in Tidings from the 18th Century. I actually lost it later that day while watching a slander trial but it turned up in the lost and found. 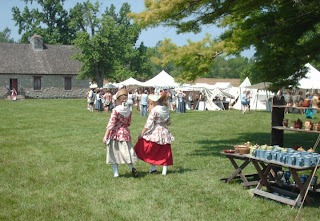 Next year I want to make a jacket like these girls'...they were so cute. I liked their shorter skirts but didn't have time to hem mine up that high. 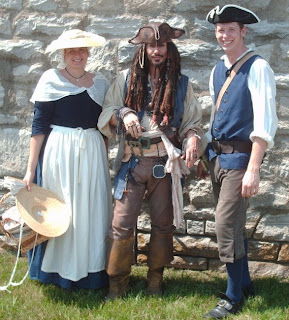 This was me on Saturday...the jacket, which you can't see very well, is after a Janet Arnold jacket which I did all myself just by looking at the pattern in the book, so I am quite proud of it as my first non-paper-pattern outerwear. My 18th century lining skills are awful though. I need to practice. And I should have put my shawl around my neck the proper way because I got rather sunburnt despite the hat. Live and learn!
Captain Jack Sparrow is an acquaintance whose costume and mannerisms are so fantastic that he has been hired to put in an appearance at the St. Louis pirate festival in September! It was hard to get a picture with him because of all the kids swarming around.
I sewed the clothes on the gentleman on the right; it was pretty gratifying that he got called up on stage during the "fashion show" later as a good representative of a local farmer. Even if I didn't have time to give him buttons down the knee of his breeches. 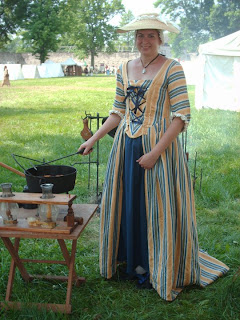 Here I am on Sunday, cooking a peach cobbler in the dutch oven...with my skirts dragging because that poor gown really needs panniers or to be polonaised. Next year, next year. It was just way too hot to wear more than one petticoat anyway, sigh. This dress is a truly nasty Simplicity pattern that I have modified the best I could. When I bought it last year around May, I knew nothing about 18th century clothing. I sewed it, wore it proudly to the Rendezvous, and came home feeling embarrassed...not because anyone said anything or looked at me strangely, but I could just tell that it wasn't quite right. Particularly the back, which wasn't a quarter-back, or that pleated-down-anglaise back....it was just wrong. So I re-worked it over and over during the past year (I didn't want to waste all that effort and fabric!) and now it doesn't look too bad, I think, but it would be better with the right supports around the sides. I needed an Ugly Puffer like American Duchess has. The more I work on the gown the more accurate it gets, so maybe when I wear it again next June it'll look even better!

The back...not TOO bad, right? Other than the length. I was a lot happier with the gown this year also because of the stays. I am in love with my stays! I even wore them to sleep in, which I know they didn't do back then, but I am having a lot of back problems and they seemed to really help keep me stable in my sleep because I woke up a lot less stiff than usual! 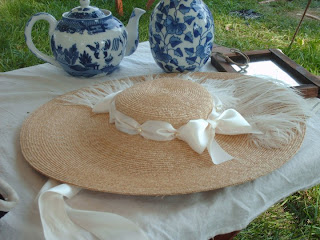 Gratuitous hat-and-teapot shot. I had been dying to get that teapot since I saw it at a previous event, and the same folks showed up here so I absolutely had to get it! It matches my teacups almost perfectly...I should have put one in the shot. And my hat, which the ladies in the milliner's tent all liked, so I must have done ok with it! I bought a new blank one to decorate for whatever outfit I choose to sew next. I would really love to do a matching caraco and skirt but my problem is that I just don't have enough pieces of the same fabric in my cabinets, so it might be more separates for me next.

I have done a LOT of costume wearing recently! I went dressed up as a piratey sort of female to the new Pirates of the Caribbean premiere at a St. Louis theatre one weekend, then over to the StL Renfaire the next, and just got back late last night from camping at the Rendezvous at Fort de Chartres. The fort was a fantastic time, as usual, but the heat was in the 90s almost all the time with the exception of hitting a reported 105 on Saturday. I was so proud that I wore stockings, shift, petticoats, corset, jacket, cap and hat and didn't pass out or get dehydrated! And actually some of the "tourists" with less clothing on seemed even more miserably warm than I was. I had another proud moment when we popped over to the brief "18th century fashion show"...even though we weren't participating, my manclothes on my gentleman-friend got called up onto the "runway" because they were missing a local farmer and he looked accurate enough that the caller was able to use him to show off the breeches, shirt and waistcoat as a typical example. It made me feel good to know I did something right even though I loathed making them....pretty girl things are much more fun.  Photos to follow, after I have done a lot of sleeping and laying around!
Posted by Anna at 11:47 AM No comments: