Maybe dead, but not idle!

Yes, I know it looks like I haven't been doing anything, but really, I have! Ok, a lot of to-do lists are lying around but that counts toward something, surely!  Actually, I finished a striped bedgown and half-boned blue stays that are moderately more comfortable than my fully boned ones, but the shape could use some re-working; I'm very short-waisted and the stays ended up long-waisted. And why oh why didn't I make them front-lacing?! Having a husband to lace is not at all useful when he's in bed by 9pm because what seamstress ever accomplishes anything of note until the 9:30 - 2am time slot?

My current large project is a very respectable dusky-blue sacque that has languished on the back burner for the last year, and it's now about 3/4 done. Hopefully I remember to get some pictures tonight. It has a few construction issues since I'm drafting rather than going by a pattern, which makes me very glad that this was just thrift-store fabric I chose for the first-ever sacque. All the more reason to make another one at a later date. This one was meant to be more middle-century middle class, since that's the most useful to me in Nouvelle France, but part of me is so tempted to go Versailles-level crazy on it.

However, I can't very well tote seven yards of fabric back and forth to work without something horrible happening to it, and since I like to have a sewing project, it has to be something small.

My mother-in-law and I took a trip to IKEA recently, where I bought some of the Sigbritt fabric for a future jacket: 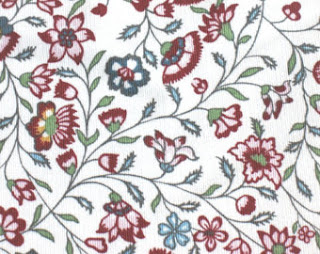 an artist's figure. What? 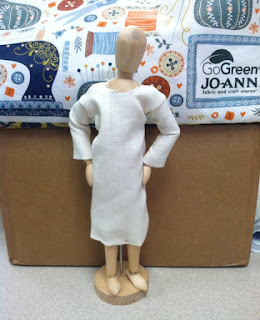 Meet Renee. She's in early stages but eventually she will have real hair and a wardrobe of clothes. I half-finished her little chemise tonight during my dinner break. If she looks sassy it's because she's named after one of the more documented French women in the area, Renee Drouin, who outlived at least three husbands (she loved sergeants in particular, must have been the uniform), conducted several side businesses like laundry and inn keeping, and is so far the ONLY named seamstress I have found in any records around here, so I feel a kinship to her! Renee the Doll will hopefully be a fun teaching tool about 18th century clothing because for some reason eyebrows start raising when I start stripping in front of people to show them all my layers. Up next: a teeny tiny pair of stays. And maybe hair. My co-worker thought it might be a voodoo doll tonight. Oops. 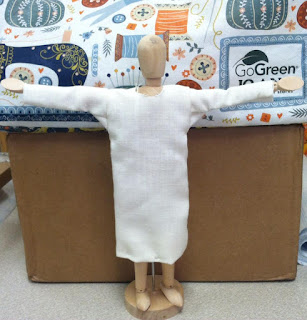 I've always loved 18th century dolls, and while Renee won't be extremely accurate (I'll leave that up to my idols over at The Old Pretenders), hopefully when I'm done she'll look like a little French lady with hair I can dress up or down depending on her wardrobe. From habitant to fine lady, she'll eventually show off some of the various styles of clothing mentioned in local inventories. It'll be a lot easier to get clothes off and on her than myself! 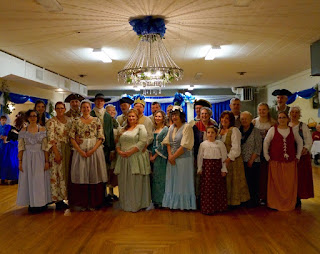 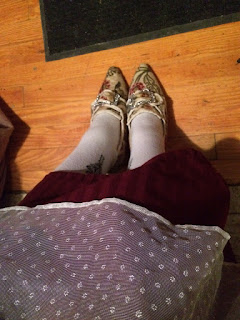 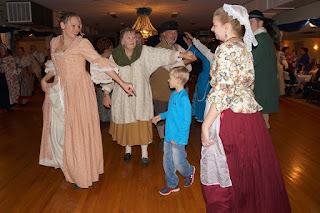 Hopefully next time I post, I'll have pictures of my finished crafting room which has been loooong in the making, but now has beautiful shelves full of folded fabric, and a cheerful color theme of light grey, gold and hot pink. Can't wait to finish it up soon!
Posted by Anna at 5:23 PM No comments: 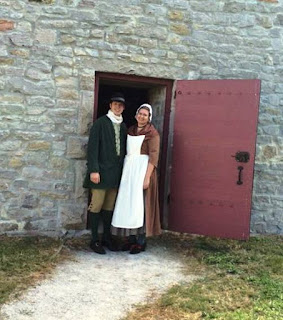 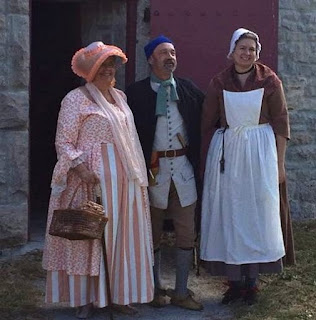