Well, once I got the new navy blue petticoat done, I really really REALLY wanted a jacket to go over it, so I dug out some navy blue corduroy and used a Janet Arnold pattern...so far so good. The jacket has kind of a longish skirt on it but I may shorten it by a couple of inches. It's weird but I seem to do better with modifying exact period patterns than I do when using actual patterns that are supposedly my size already. I once had a dark blue bedgown but it was so hideous and unshapely that I covered as much of it up with a pinner apron as I could.

Still putting off the man-clothes, how I hate them. I can't get motivated to do anything regarding them, but a deal is a deal, and I want the chair my friend promised me! :(  I keep getting distracted by all the adorable 18th century girlie accoutrements...I am dying to paint a couple of fans I have, and sew a needle case to go in my housewife, and do mitts and a cloak and a couple more caps and shawls and aprons...good grief!
Posted by Anna at 4:55 PM No comments:

Finally some documentation that I have not completely been twiddling my thumbs in the 18th century, haha. But first, credit to some very helpful resources: Nicole at Diary of a Mantua Maker had a couple of tutorials that were the inspiration for my chemise and pocket (ok so it wasn't just inspiration, I pretty much straight copied because her instructions were so excellent), and Lauren at American Duchess was so wonderful for patiently emailing me a little more detail about what went into her beautiful Sunny yellow-and-white stays that I did not even use a stay pattern, I just went by her photos and extra info.


I sewed up a dreadful mockup of the stays before I started with my real fabric, and this must be the ugliest mockup in the history of such because I was just throwing together whatever materials I could find (or whatever thread happened to be on my machine). 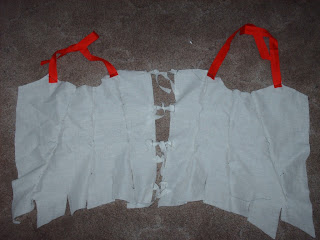 Aren't they awful? But based on that, I now have...this! 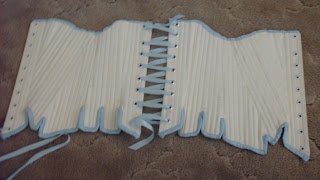 They are fully boned with plastic zip-ties, the big kind, with metal grommets (I did get around to covering the front ones but what a chore), an outer layer of cotton upholstery fabric that has a subtle white stripe, an inner layer of some fabric I already had but can't identify (it's like canvas, only brushed soft?) and a lining of linen. The binding is blue cotton, with blue satin ribbon for lacing.

I have to admit, my tabs, particularly towards the front, turned out really bizarre. Not thinking, I did not cut one tab on each side near the hip bone, and then the squiggly bit in front, well, I don't know what happened there. They don't look like any stay-fronts I've ever seen but oh well, they hold my tummy and hips in, and surprisingly don't dig in to my thighs when I sit down. They are really quite comfortable. 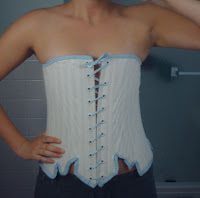 And another view from the back, with the as-yet uncovered metal grommets *wince*: 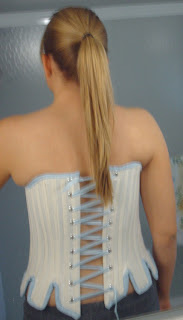 If I were doing this project again, which I yet may, I may try them with straps, better-placed tabs, closer under-arm-cut and a higher back. I actually have them laced tighter in the photos than I intend to wear them, so hopefully that will release the hilarious over-the-stay bulge effect going on here. I haven't tried them on under my anglaise gown yet so I'm hoping that they will give me a nice solid silhouette that will take care of some of the strange torso-ripples that were going on before.

And also, my rather dreadfully embroidered pocket: 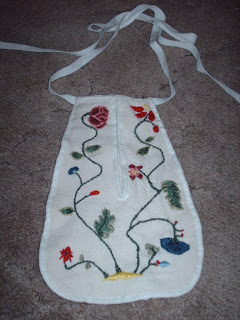 And my shift! Which I did not photograph on myself due to its extremely see-through nature. 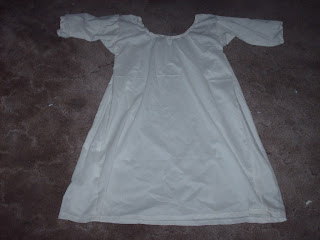 I'm sneakily abandoning the men's breeches for the weekend to work on a navy-blue petticoat to dress my striped anglaise down, and then I will try to get some pictures of that up!
Posted by Anna at 10:11 PM No comments:

Thank heavens I am almost done binding my set of stays. I hate going around the tabs. They don't look fantastic to me, but they work beautifully and they are actually quite comfortable, in fact I love how I physically CANNOT slouch while wearing them. It's like always having a solid chair back to rest against. I think it may even have helped with the minor back pain I always have, at least for the twenty minutes I sat in it while finishing watching the Tudors series finale.

Also, I am done with my pocket, which turned out rather pretty. Thank goodness nobody can see the backside of it because it looks like a chimpanzee went crazy in the embroidery thread box. I will try to get pictures of the stays and the pocket up sometime soon.

Men's breeches are up next for a friend :(  Just thinking about them makes me want to cry with boredom, but we are working on a barter system; he is making me a chair (because nobody wants to sit on the ground at an event after they've worked hard to make a pretty gown). I am selfishly only interested in clothing that *I* can wear. So I might sneak some work in on the Italian Renaissance dress I am making for the St. Louis RenFaire in May.
Posted by Anna at 11:47 PM 2 comments: