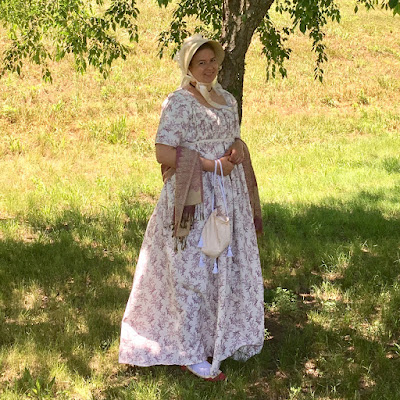 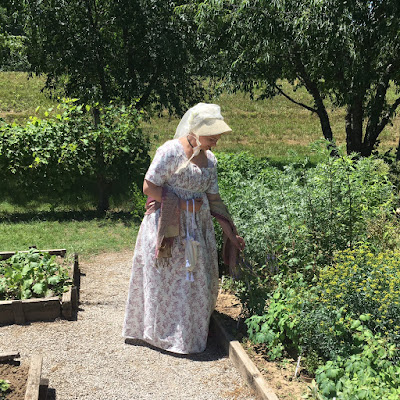 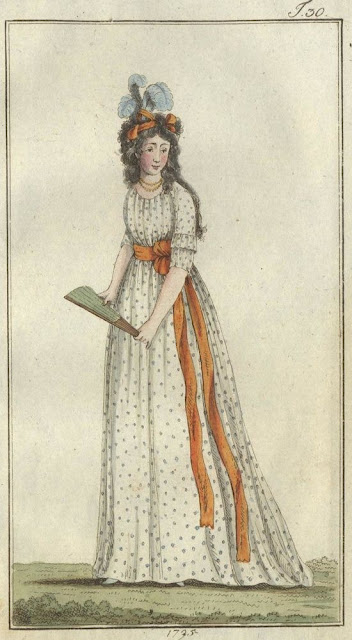 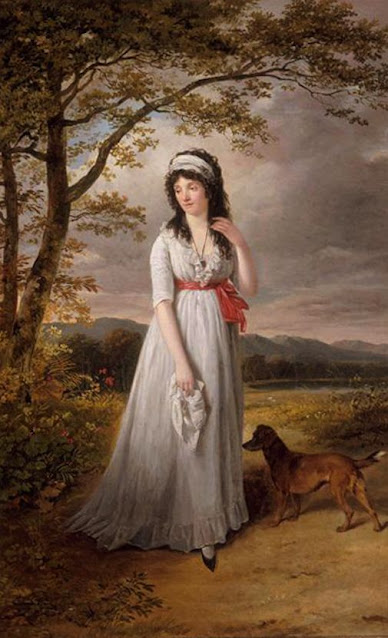 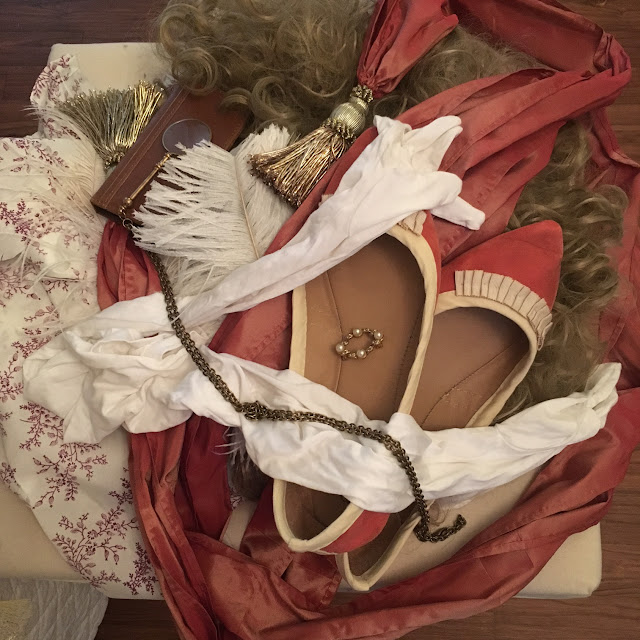 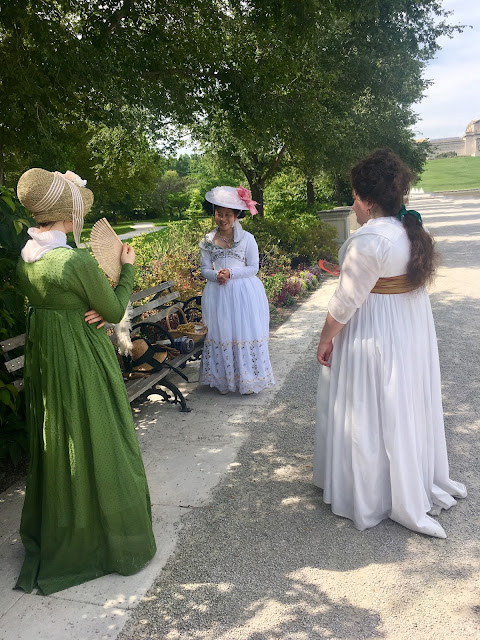 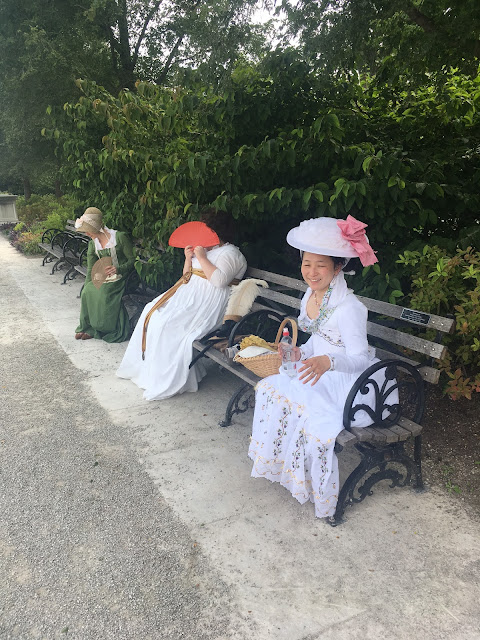 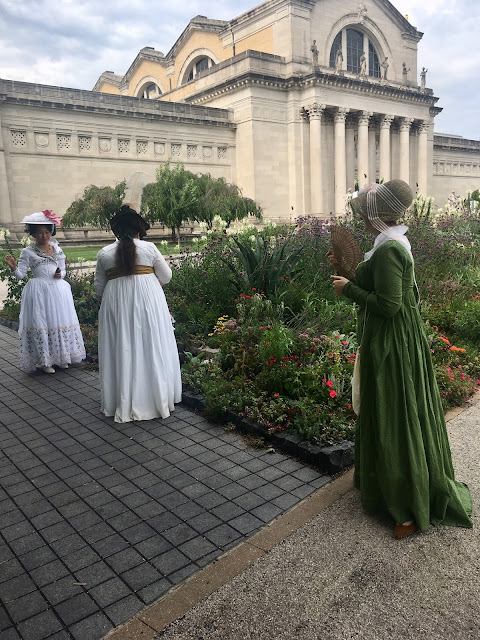 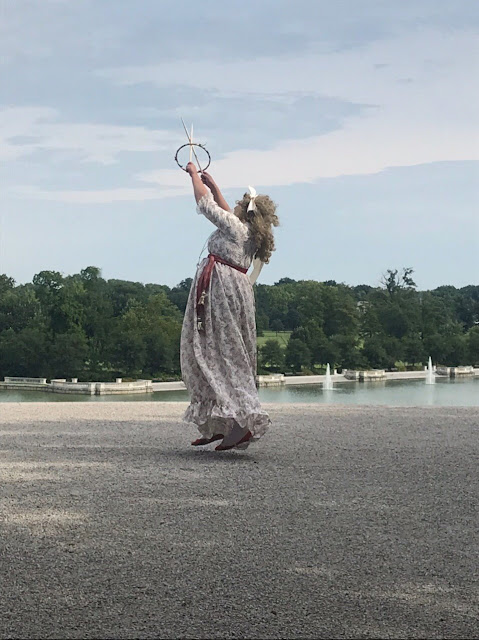 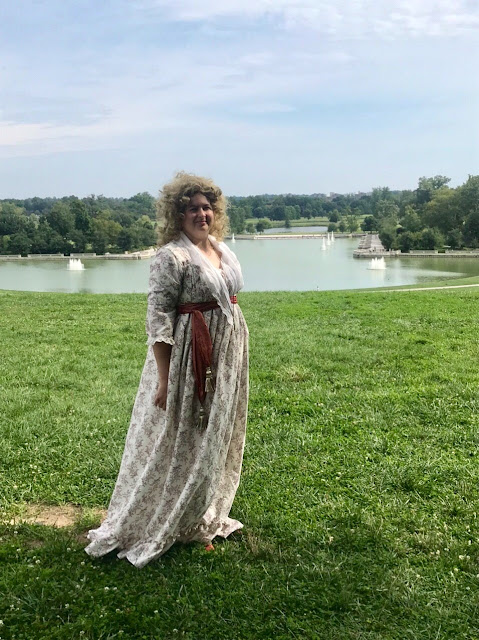 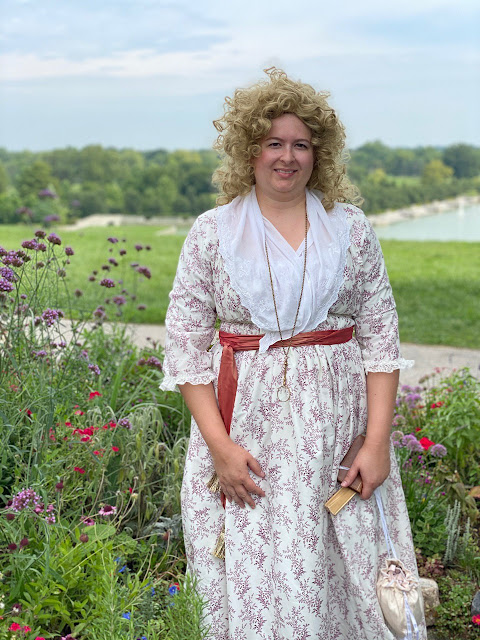 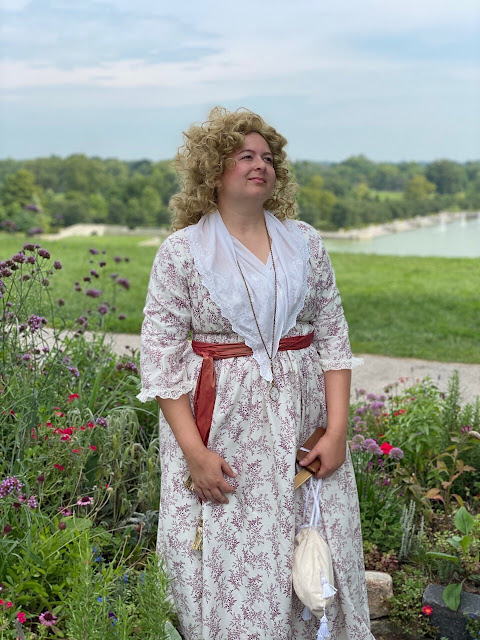 This, I think, was my first finished gown during "The Great Pause" as I've taken to calling the recent plague. When my work at the local library was put on hold in late March (we then opened for curbside service in May and have gradually fully reopened since), I gleefully thought I would be doing SO much sewing at home, but it didn't take long for the existential dread to set in and cripple my productivity. Finally, I whipped out this pattern (won at the Costume College raffle last year if I remember correctly), ordered some fun fabric from the Andover collection of cotton over at Thousands of Bolts (cannot recommend enough for late Regency through Victorian...they have a themed collection just called "Historical" if you have a good eye for prints at unbelievable prices), and knuckled down to do something.

Firstly, the booklet of instructions for this pattern is *excellent*. I don't know how any intermediate sewist could mess this up because they so thoroughly cover each step with pictures. It was so nice to have that to keep me on track while my brain seemed to be wandering around outside my skull.

I decided to take the very short puffed sleeve option and marry it with the very long sleeve extension, another plus about this pattern being that you can mix and match multiple Regency style options! 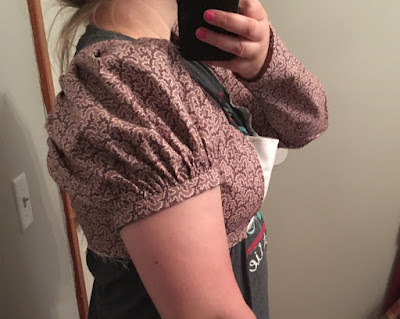 As usual, I made no mockup because I like to live dangerously. I did measure my arms though because they are quite disproportionate to the rest of me and have occasionally caused problems. No fear though! The bodice and more importantly sleeves turned out perfect the first time. 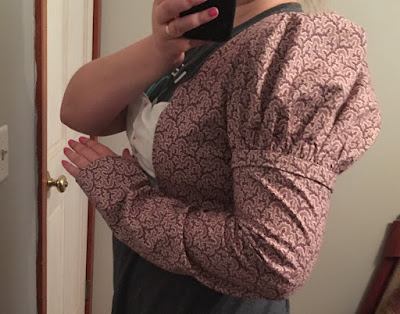 Here's the long-sleeve option (shockingly plenty long for my fat-at-the-top yet spidery-long arms).  I love that you can just lightly baste in the sleeve extension, and then just as quickly take it out for summer-wear with a seam-ripper! 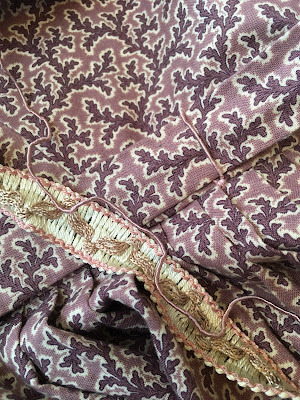 A close-up of the fun fabric. I realized suddenly I didn't have anything to secure the back ties with for a loop, so I picked apart this weird piece of trim and got a really nice silky cord off it! Easy loops ...I don't like cotton self-loops, they just look too casual and give too much friction for my liking. 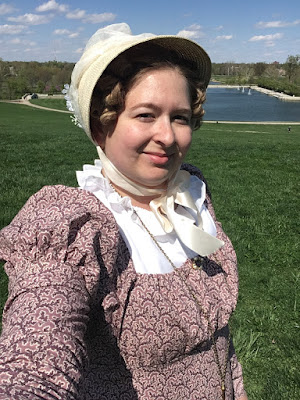 My friend Emily invited me out for a walk in the fresh germ-free air, so I whipped up a quick chemisette as the brisk spring day was going to be chilly (thank goodness for those long sleeves!), put on my bonnet, and grabbed my quizzing glass in case I needed to inspect anyone, haha. 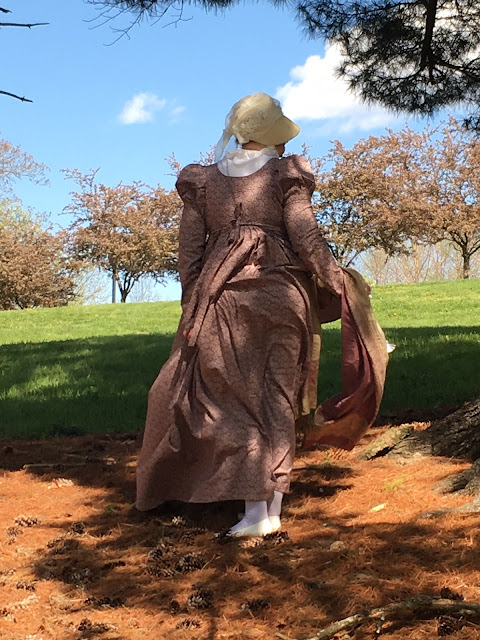 Walking under the pine trees, with a Regency wedgie (I had long johns under this for the chill, and bitterly regretted not wearing a petticoat because the dress stuck to the underlayer constantly, lol). 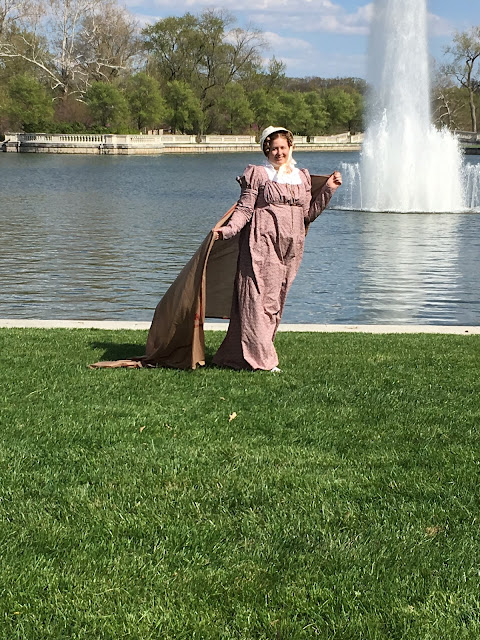 Excellent front-wedgie too, alas. We were taking turns being dramatic with Emily's shawl in the breeze. 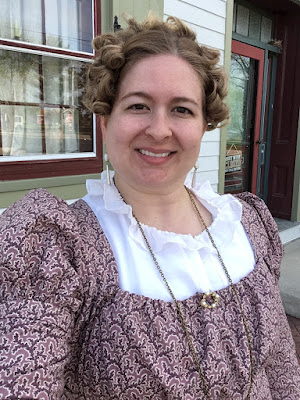 I stopped by the local Regency/Victorian house museum for a few outdoor pictures afterwards...you can see my antique brooch, and I got a lovely pair of opal and pearl drop earrings from The Lady Detalle! My front curls are NOT my own hair, which won't hold a curl to save its life...they are "side-swept clip in bangs" from Amazon. You can roll them in those foam rollers, dip them in boiling water for 30 seconds, let them completely dry over a couple of days, and voila! Permanent clip-in curls! I have used them for Regency, plan to use them for 1830s, and actually also used them for 1700-1710 just by clipping and pinning them in a slightly different way. Very versatile DIY hairpieces. 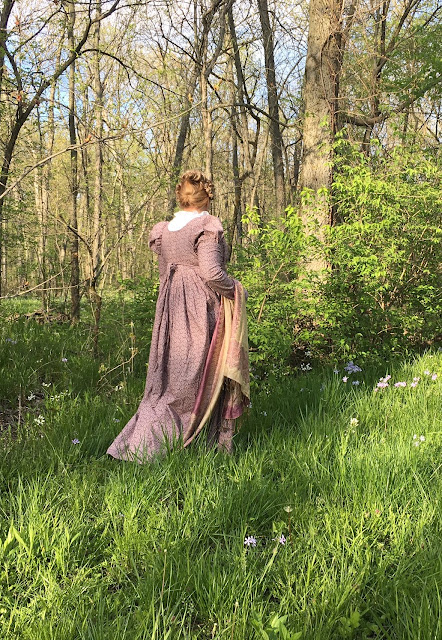 Enjoying the Spring flowers just off the road near my house. 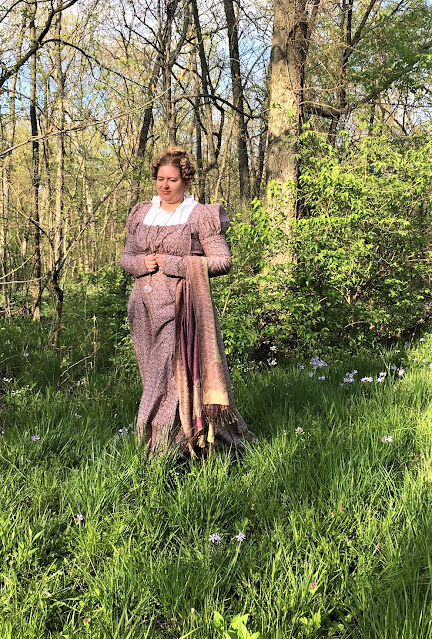 "We must allow her to be an excellent walker, I suppose." 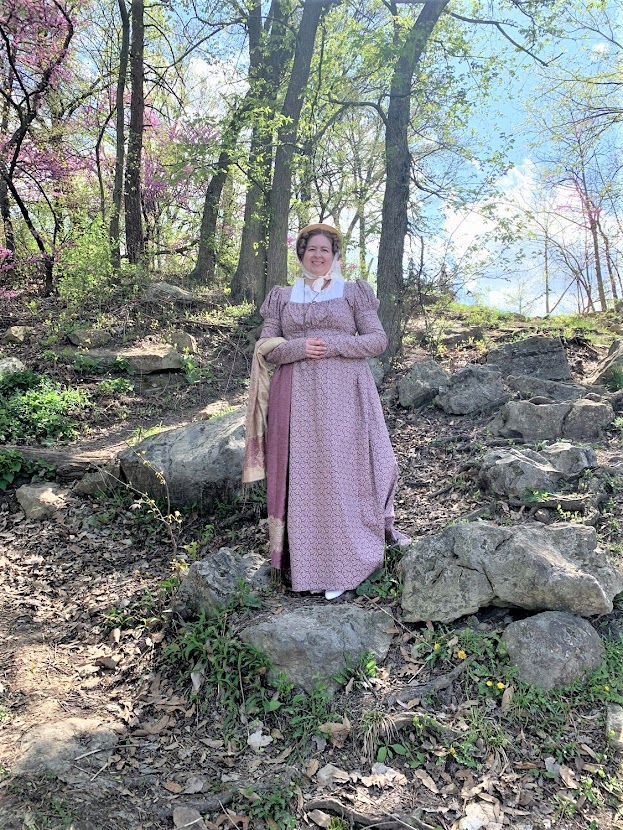 I think this was my favorite shot of the day that Emily took at Forest Park...I match the blooming red bud trees nearby!
All in all, an extremely satisfying, quick, painless project, and I expect I'll use this pattern for many years to come! Super impressed by it and I highly recommend it to anyone who has their sewing basics down and is looking to make an accurate silhouette without much fuss. You can do all kinds of variations in fancier (or plainer) fabrics with more or less trim. It even has an option to add a train for ballgowns. VERY worth the money and I'd have bought it even if I hadn't won it (but thank you, whomever donated it at Costume College!).
This was exactly what I needed for a kick in the rear to start sewing again. I went on to do THREE new 18thc silk petticoats, a lovely candy-striped Robe a la Anglaise from fabric I won from the "Fancy Styles Fabric" Instagram giveaway, a re-make of a 1790s gown (adding a ruffle and sleeve extensions),  an Edwardian plaid skirt (working on the matching jacket right now) annnnnnd my favorite, a 1700-1710-ish Mantua out of my Holy Grail 'bizarre silk' fabric. Still to come! :)