Overly optimistic as always, I have a TON of things I'd love to make this year, or at least to get started on! In no particular order (I want to leave room to tackle them only as they inspire me), here we go! 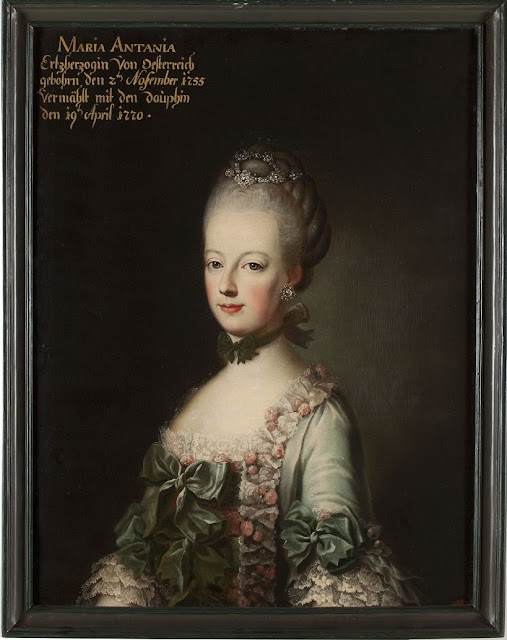 Somehow I stumbled across this portrait of Marie Antoinette -- and while my brain is probably just forgetting a million images I've seen, dark green feels less usual in 18thc portraiture than most other colors, especially for the frequently painted MA. This painting crossed my path at just the right time, when I had just bought a stunning changeable green taffeta shot with the lightest pink, absolutely perfect for recreating this gown. But because I love the fabric so much and want to save some of it, most likely I'll be doing a jacket/petticoat combination rather than the full sacque gown I imagine was probably being worn here. Also fortuitously, I have a LOT of suitable lace (something like a 26 meter roll?) and it took no time at all to find the little pink paper flowers.  The petticoat is sitting at home right now, already halfway done, as I'm going to wear it to an event this weekend (hopefully) with a plaid pet en l'air. 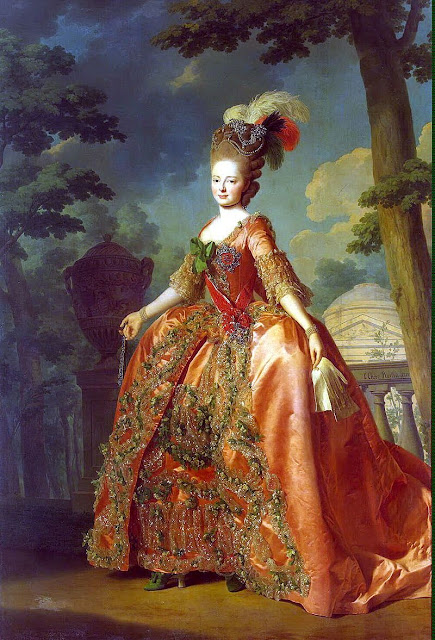 Next up, this amazing gown in Alexander Roslin's portrait of the Grand Duchess Maria Feodorovna (born Sophie Dorothea of Württemberg, later Empress consort of Emperor Paul I of Russia). I have a fondness for her as a historical personage, it sounds like she made the best of a difficult situation with the nightmare of all mother-in-laws, the formidable (and similarly German-born) Catherine the Great, who yanked from Maria the first two infant sons she bore. But though most women would have been overshadowed by a monarch like Catherine, Maria Feodorovna held her own. She was bright, well-educated, curious, won over her difficult husband, had 10 children, and greatly influenced Russian charities, architecture, and politics during her era.

I'm not much of an orange-wearer, but this dress just won't leave my mind, and I've been wanting to try it for years. I feel sure it's silk satin rather than taffeta, and most likely a Robe a la Francaise, but for the sake of yardage (I have an orange satin that's been sitting in my stash) I'm going to attempt to make it a Robe a la Anglaise instead. I have rather a lot of vintage gold net and ivory flowers with green leaves, so supply-wise I should be set! 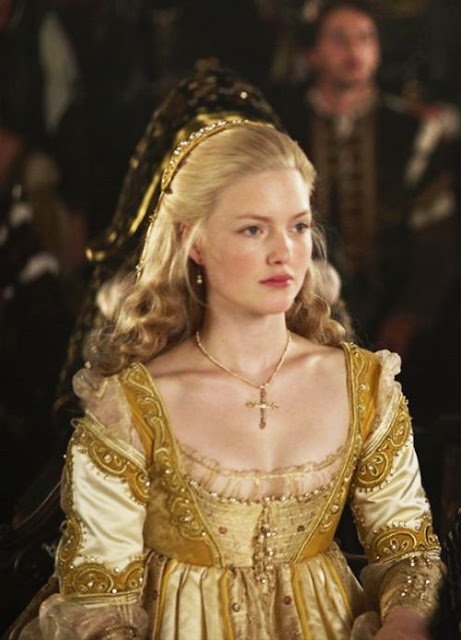 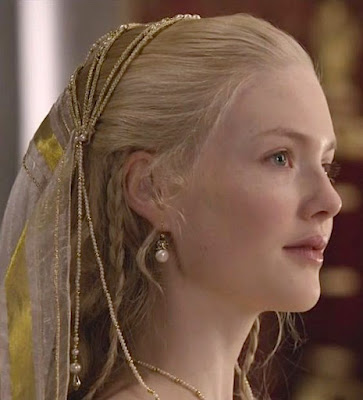 A Renaissance gown has been very high on my list for the past 6 months. For years I have watched The Borgias over and over and OVER again, and love all of Lucrezia's floaty, decadent gowns, so maybe this year I'll attempt something like a mashup between the papal investiture ceremony gown and her wedding gown (because I love her headdress in that scene). I now have the Margo Anderson Italian Gamurra pattern recommended to me by Costumer's Closet, 10 yards of a stunning gold silk damask (for $10 a yard!), and quite a bit of a sheer ivory window-pane material for a camicia...I don't anticipate that any of it will really be historically accurate, being more screen-inspired than anything, but since Renaissance is a hot thing in the community on Instagram right now, it might be time to dive in! The show mixes textiles and textures in the most intricate, delicious way, so it would be fun to experiment with that. 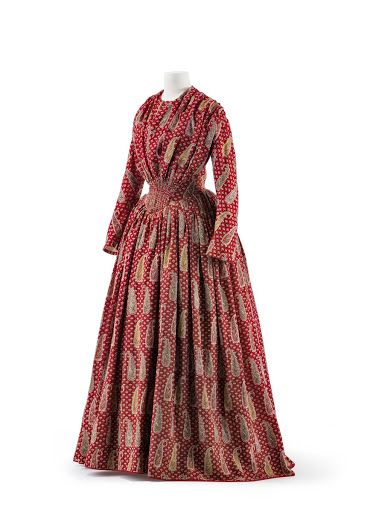 Victorian needs to be high on my list this year as well, if I ever want to finish my self-set "Decades" goal of making one gown per decade from 1700-1900.  I have a really fun red cotton print that I'd love to use to make something like this 1840s day dress! There's a good Truly Victorian pattern in my stash that should produce a similar gown. 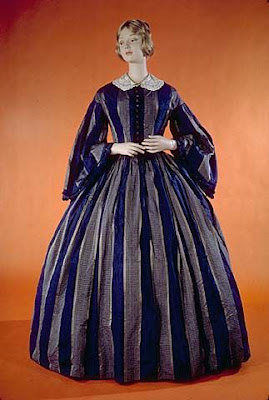 Similarly, I'd like to get a good 1850s gown in, from a dark brown and navy stripe (synthetic, but hey I'm not just going to throw it away!).... 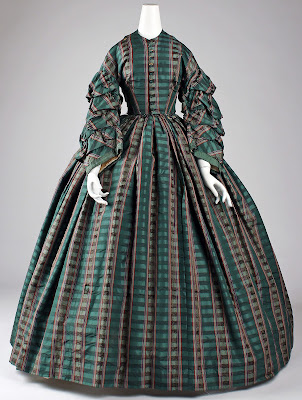 ...and a plaid 1860s gown as well (I've got a brown/blue/red plaid silk that I picked up for $10 a yard and it would be perfect for this).  While I only plan to make the day bodice for now, eventually it'd be nice to also have a matching ballgown bodice, and hopefully there's enough yardage left over for that. 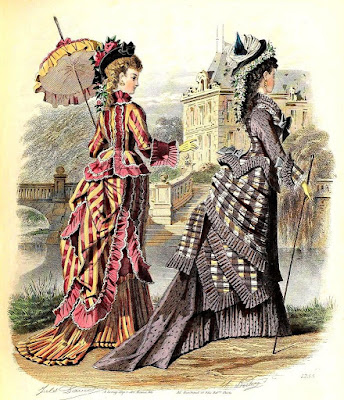 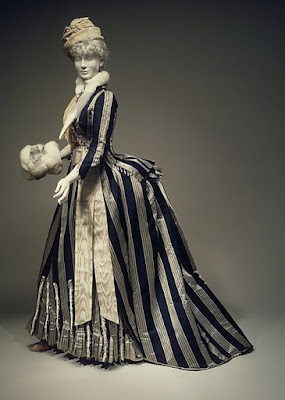 ...and just to round out the Victorian insanity, this amazing bustle gown, for which I have lots of grey satin stripe with a little bit of yellow ribbon stripe running through it. 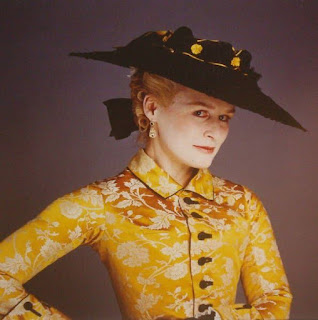 I have a beautiful yellow and white silk damask that would be a stunning riding habit, a la Glenn Close in Dangerous Liaisons, and a black straw bergere, all ready to go....if I ever feel like making a million black buttonholes! 😂 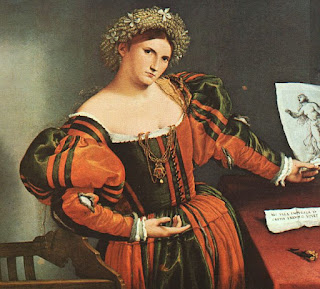 From the thrift store, I found a remarkably similar orangey/burgundy fabric with dark green stripes already woven in....and I think it'd make an amazingly similar outfit to the "Portrait of a Woman inspired by Lucretia" by Lorenzo Lotto. We'll see if I ever get around to this or not, it's not high on my list but the fabric is just too good to let go.

And then a couple of VERY long term projects, because they'd be so detail-intensive: 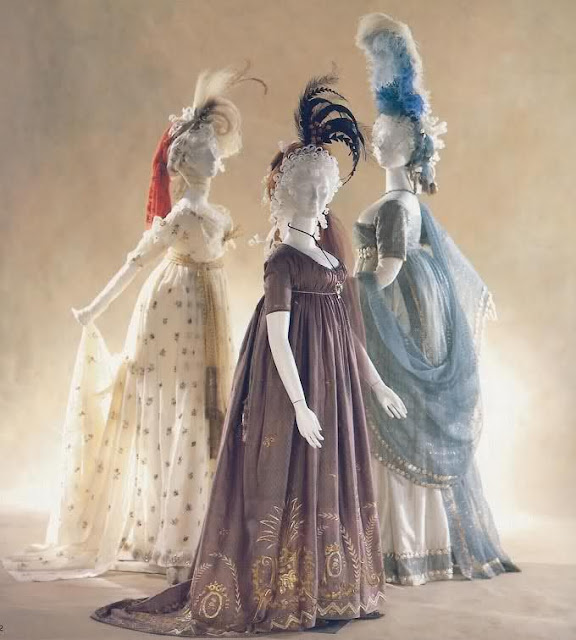 I'd just love to have an early Regency ballgown that's spangled at the bottom. I have a chocolate brown silk in the stash already, and a ton of flat gold spangles....but probably not as many as I'll need for a very intricate design. I might start off very small in design and see what my tolerance for such a project might be, but thanks to the 1790s adjustability, I could work on such a thing for years and still be able to fit in it despite any weight fluctuations. 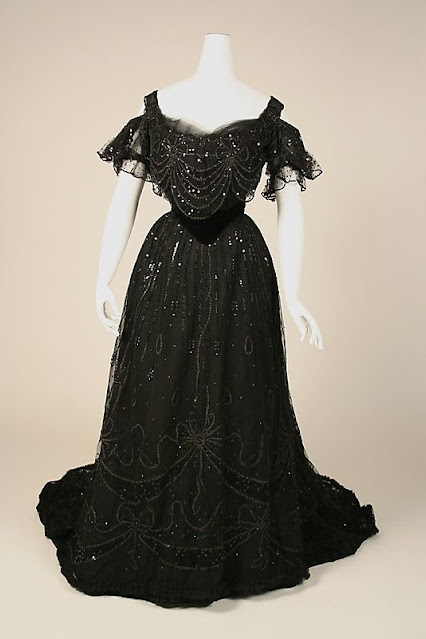 Lastly of all -- This incredible sequined Worth gown has been on my radar for years, and it's always surprised me that none of the 'big' costume names have been interested in tackling it. Whatever I do would only end up being my approximation.... I have neither the interest nor patience to painstakingly count the number of sequins per square inch to make an exact copy. But it really is an absolutely stunning piece and I can only imagine how it would shimmer with each movement. The silhouette itself is nothing unusual...basic Edwardian bodice and skirt shape... but the sequins embroidered onto the sheer overlay on both the bertha (is it still called that by the 1900s?) and skirt will be a challenge.

So there we have it! Way too many projects for me to get done in one year, but I'd rather aim too high than too low. It's lovely to have something to look forward to, and I'm not really the kind of person who feels pressured by setting goals for myself and then not moving as quickly as I'd like on them. These days, sometimes it's progress to get in 10 minutes of sewing, but my love of fashion and art just can't let pieces and projects like these go without a fight!