HSF #6: A tiger of different stripes

The Challenge: #6 -- Stripes! I did a striped man's frock coat for Mr. E. in exchange for him making me some more wooden threadwinders.

Fabric: Well, it's stripey...I'm only guessing at the fabric content but it's quite like a soft canvas, so I'm assuming a good bit of cotton content. I'm not the best judge of these things but it didn't feel like a synthetic at all.

Pattern:  Simplicity 0857, modified...the amount of fabric in the gores was excessive...it would've looked like a flared button-front dress on Gentleman E., so I did away with all but the back one. Also the cuffs were weirdly huge and floppy so those got modified as well.

Year: We'll call it anywhere from 1740-70 (i.e. I really don't think it'd be right in any one of those decades so we'll just lump them together, oh well)

How historically accurate is it? Because I haven't researched menswear as much, it's kind of an approximation...also the inside seams are machine done because if I'm not wearing it, I just can't bring myself to care that much, haha. But all visible seams are done by hand and the buttonholes are half-machined and then hand-finished. There's a button stand added to keep the buttons from pulling all out of whack after normal wearing, which I learned about from Hallie's post. I don't know if I did it quite correctly but it really does help keep the buttons looking straight and sturdy!
The coat is not lined because the weather here when we usually have our main summer re-enactment is VILE. The French fort is nestled in basically a floodplain bowl between bluffs on either side of the Mississippi (those idiots never did have a good head for feasible building sites, see: New Orleans) that yes, occasionally floods, but more often crushes you with the humidity that settles down like an invisible thick unbreathable soup and leads to 100+ F afternoons. I know that in areas like South Carolina, colonial coats were sometimes left unlined because of the interminable heat, so I chose to do that as well because I'd rather spend time thinking about how miserable (yet fabulous) *I* feel in layers of petticoats and gowns and caps and hats than listen to Mr. E. grouse about his hot coat. Also for that reason it's intentionally quite loose...as are his shirts...his wrinkly breeches...you get the idea. Tight things make him squirm and protest. So he doesn't QUITE cut the ideally dashing figure as it always looks like he's wearing the clothes of a bigger guy, but as long as he's happy!

Hours to complete: Probably around 8.

First worn: Not really yet! Just to try on. Hopefully next weekend for an event, but if not then it'll be worn early June.

Total cost: I think the fabric was about $4 from the thrift store, and the thread was probably almost as expensive.


He was quite the ham when he first put it on.

Close-up of the buttons and the button stand, functional pockets. 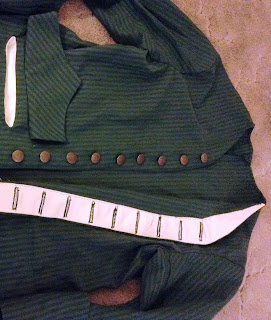 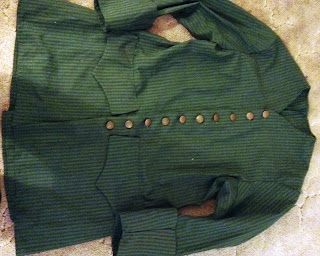 I really dislike menswear, partially because it's hard to understand, having spent a good part of my life shopping for and sewing for and bemoaning the female figure, which despite its weirdness is at least familiar in trying to fit. But men! At least, the one and only that I've had to try to pin things on is, himself, like a bunch of squares and rectangles...which should seem to make it easier, but it's been a strange transition. While it turned out better than I thought, for the HSF By the Sea challenge I'm thinking about doing another one for Mr. E now that I know a bit more. Could I be...starting to enjoy menswear?! We'll see! If I could get good at it, it would be lucrative around here because there are a great many more male re-enactors than female and it might pay off to be able to sell men's items.
Posted by Anna at 1:54 PM 2 comments:

Email ThisBlogThis!Share to TwitterShare to FacebookShare to Pinterest
Labels: manclothes

Yeah yeah, I'm behind on Historical Sew Fortnightly. I actually had #3 done in time but have been too lethargically stricken by the boring common cold to feel like dragging myself on here and collecting my thoughts and photos well enough to post.

#3 is something I already posted a picture of, and I'm not going to do an in-detail photo series on it because it bored me to tears just making it:

The Challenge: #3: Under it all (boring petticoat)
Fabric: Lord knows...it was some kind of very large ivory tablecloth, most likely a linen blend by the feel and look of it, but I couldn't find a tag.
Pattern: No pattern, just winging it like I have ever since making my first petticoat based on the lovely Koshka the Cat's tutorial.
Year: 17whatever, it's kind of hard to pin down a specific date for something so basic that I don't think changed much.
Notions: Thread
How historically accurate is it? Very, as far as I know...it looks like most museum petticoats and is entirely handsewn. Also I think the fabric is natural.
Hours to complete: 3-ish
First worn: my birthday
Total cost: Nada, I raided my stash! 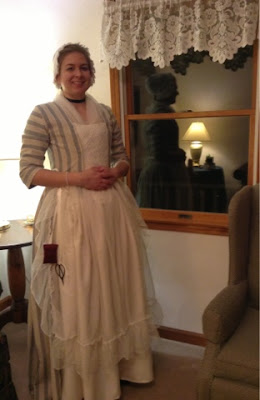 There's really no point in taking a dozen pictures of it, haha. It's just a boring off-white petticoat that I felt "meh" about when I finished it. Just one of those things that I needed but didn't really want to make.

And then much more fun (to me, anyway!):

The Challenge: #4: Embellish (Sleeve Ruffles aka engageants but I gather we're not supposed to use that term, unless we're French? Who knows.)
Fabric: None! Bet that threw you, haha.
Pattern: Eyeballed it
Year: 1740-1780, we'll say
Notions: Lace, ribbon
How historically accurate is it? The materials aren't quite right, but I think the construction isn't too bad. Plus they're completely hand done.
Hours to complete: 2 1/2, if I hadn't gotten distracted by tv a lot
First worn: Not yet! Looking forward to putting them on dresses, taking them off dresses, putting them back on...you get the idea! I wanted them to be easily interchangable with gowns.
Total cost: I think about $14. 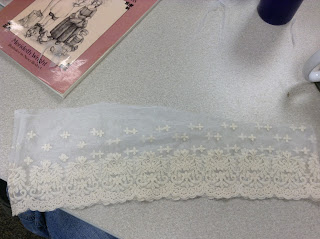 I started out by trimming the lace a little so the ruffle would be a little narrower where it hits at the inside of the elbow/fore-arm, but in retrospect I could have trimmed even a little more off to make the contrast greater with the length of the back of the ruffle. 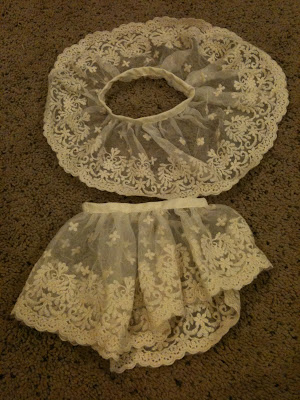 They're very ornate, and probably not quite the thing to go on a middle-class "Sunday" gown, but I just really, really loved the lace. 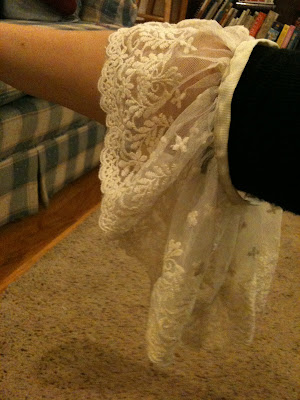 Tada! All ready to be sewn (or even safety-pinned) into a gown's sleeves! I felt very elegant just making dismissive hand motions at the dog when his drooly jowls got too close to my superior person.

Eventually for a challenge I'd like to make an entire lower-class ensemble from some delightfully clashy colors. Don't judge me for my 70's berber Thanksgiving-themed basement carpet. 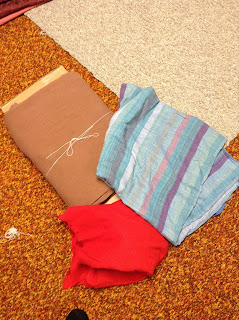