Side foray into Regency

It's been a busy last couple of months as I have been dipping my toe for the first time into Regency-wear. I have a LOT to learn yet about the subtleties of the different decades, but have been so pleased by how quickly and easy Regency gowns seem to go together after years of making 18th-century clothing.

For a little bit there I thought I was going with some friends to the Jane Austen Festival in Kentucky, but have a scheduling conflict that won't allow it this year. Nonetheless, next year hopefully I'll be prepared! In the meantime I'll have to enjoy everyone else's pretty pictures.

Some lovely striped silk had been languishing in my stash for years, bought from Cynthia of Redthreaded's Etsy shop a long time ago. It was too light and delicate for 18th-century wear but I think it made a lovely Regency evening-gown! I can't wait to wear it to a dance. 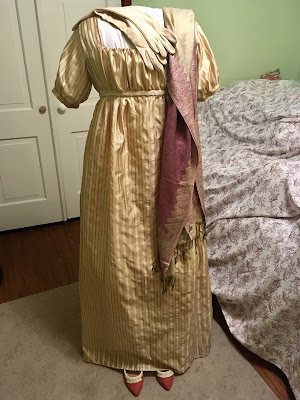 I also dyed some little pointed-toe flats from a hideous flourescent orange/coral to a rust-red, and sewed some trim on them -- if I hadn't been impatient I would have been smart and ordered some Petersham ribbon so as not to get the wrinkling around the curves of the shoe. May yet one day rip it all off and do it right. 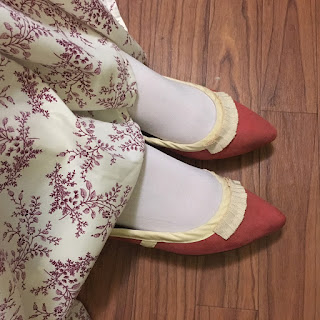 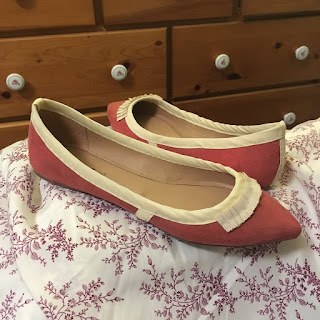 Someday I plan to buy all my dream jewelry from At the Sign of the Grey Horse, In The Long Run Designs and Dames a la Mode, but alas, while I am on a fairly strict budget I'll have to make my own. Still, I was very pleased how this coral necklace (beads from Michaels) and collet necklace (beads from Etsy) turned out! They'll hold me until I can indulge in quality gorgeousness. 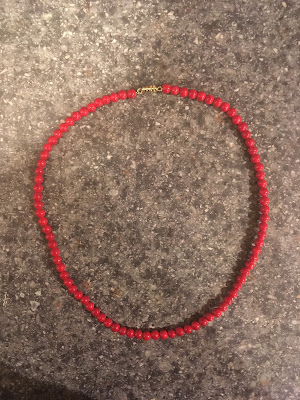 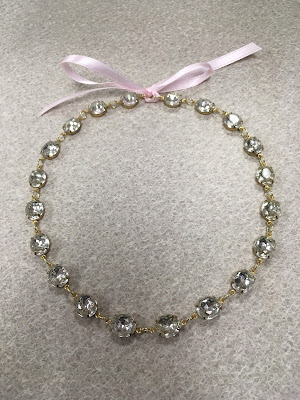 This past weekend was the annual summer Rendezvous at Fort de Chartres, and Saturday was disgustingly sticky as usual. Still, some of us from the newly-formed St. Louis Georgian Sewing Society (we're on Instagram and Facebook now!) found each other and had a sassy little hang-out. From left to right, Emily in her gorgeous new anglaise and fun hat, Kat in regional German attire, me as "comfortable" because I'm lazy at this event, and Kim in a fun floral and stripe combo. We looked awesome, especially considering the indifferent standards of this weird event (supposed to be 1720-1820 Nouvelle France, but mostly populated by half-naked 'mountain men,' teepees, and women in ugly chemises/Little House on the Prairie cabbage rose dresses. Ick). 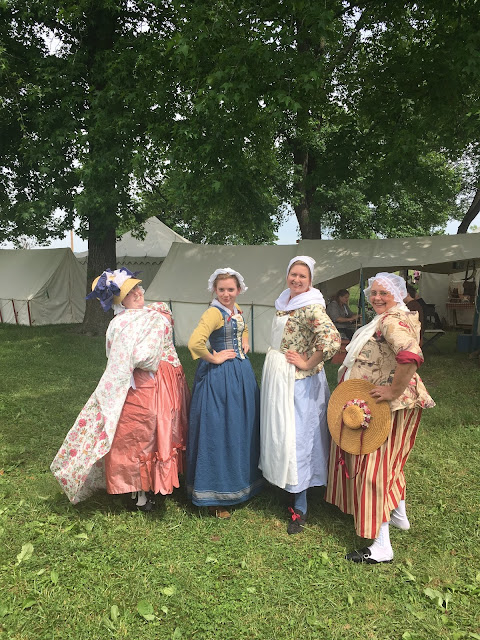 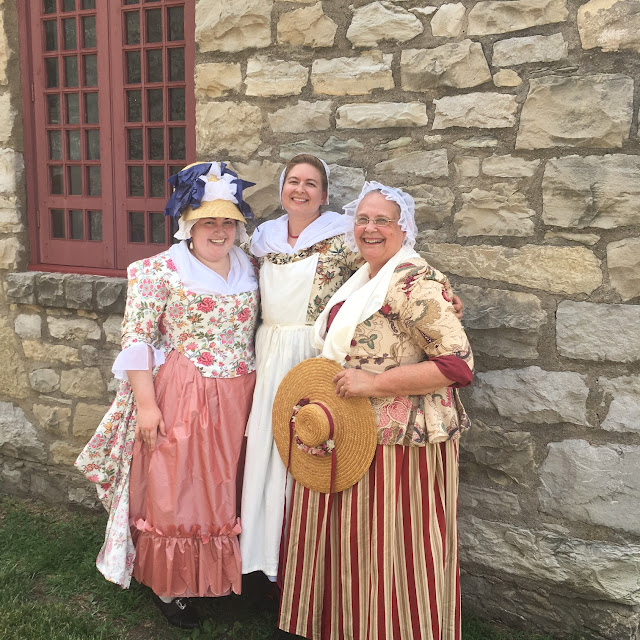 You'd think that after hanging around in the heat all day I'd have slept really well that night when we got home. But no, the insomnia kicked in and while I frustratedly twiddled my thumbs a genius (?) idea came to me to whip up a bonnet, since I was contemplating wearing Regency the next day after suffering through the heat in 18th century stays. So I started with a hat from Dollar General that I'd never worn and probably never would: 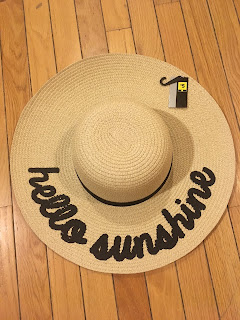 I cut it about at the halfway mark where the lettering stopped. Bending the now-cut brim back, I got it to a point where I felt like it could look somewhat Regency, and sewed it there. 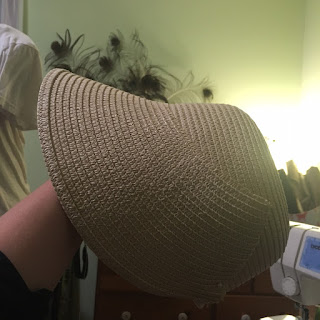 If I had had more time, I would have covered the whole crown with lovely puffy fabric to hide the brim-manipulation, but by this point it was about 2am and I knew if I didn't put something on it and force myself to bed, I'd be too sleep-deprived to enjoy the next day of Rendezvous. So I threw some dotted veil at it and tacked some silk flowers on and called it a night, lol! In the borrowed and paraphrased words of Pride and Prejudice "I shall pull it to pieces and make something better" although I don't think it is "very ugly" like Lydia Bennet's bonnet. 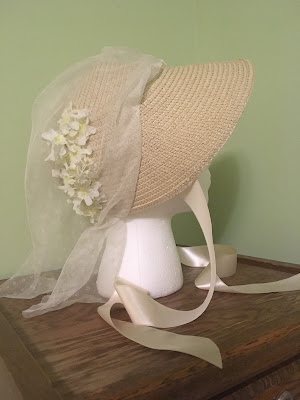 I think it did the trick with my (also new) floral gown. It's more 1790s with the straight sleeves and pleated back (hopefully I'll get some good photos of that eventually, I did something similar to the Tidens Toj bridal gown) so some day I'll style it correctly with a turban, loose long curls, and a sash, rather than the bonnet and all my hair up. Regency is so comfortable on hot days....I am QUITE in love with it and will be very tempted to always go for it at this event. 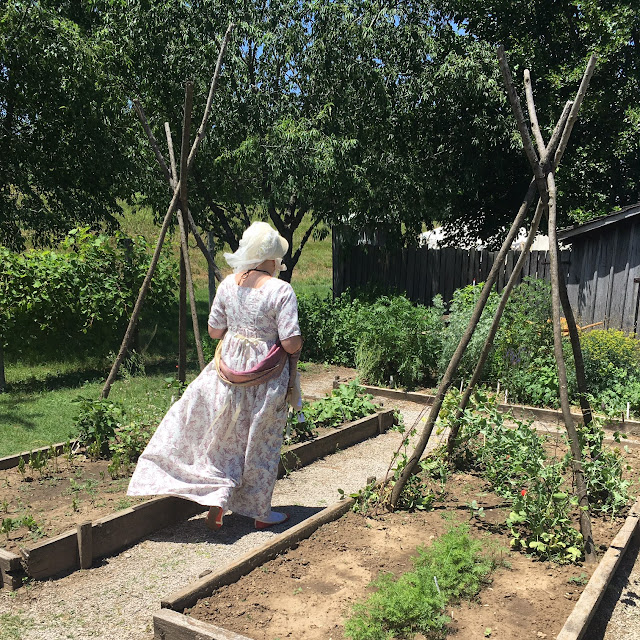 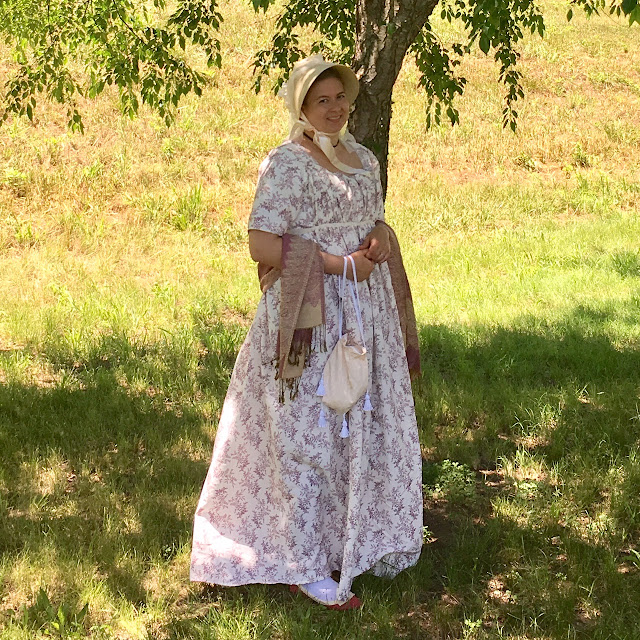 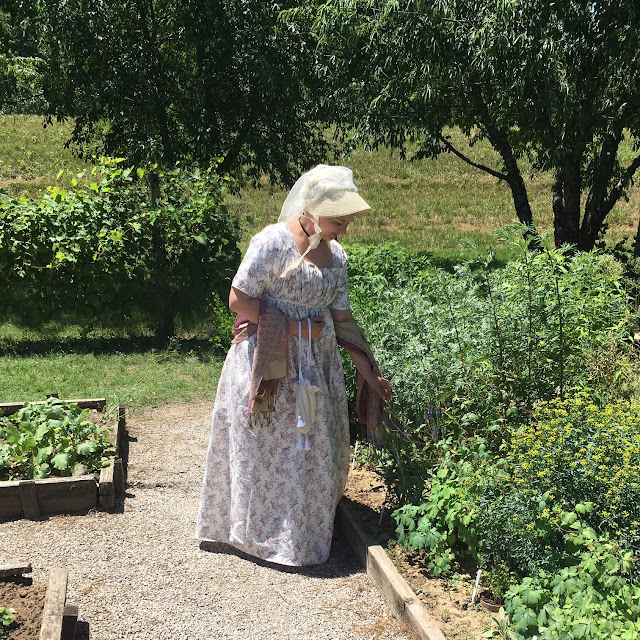 That's it from me for now....more to come as I'm groaning my way through menswear so my husband has SOME sort of an 18th century suit to wear to the St. Louis Georgians Francaise Tea in August.