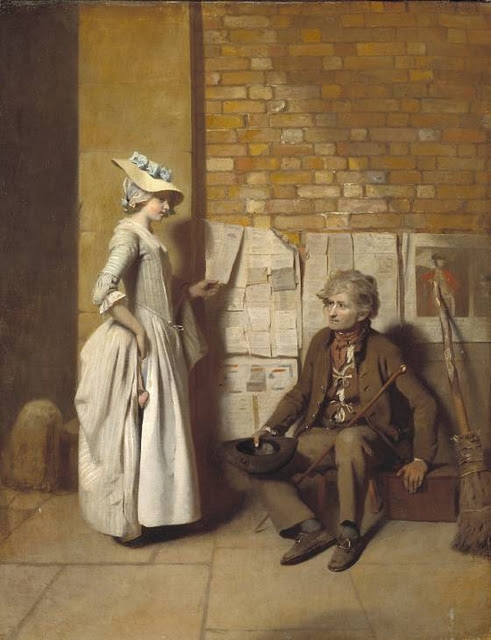 Something unrelated struck me today while I was glancing through some reenactment photos from Williamsburg. A couple of gowns on a few ladies (I don't think they were technically affiliated with CW, just "go-ers" in colonial clothes) looked...off. It took several minutes of thinking to figure out the problem; the fabric looked good in color and material, the construction of the gowns looked decent, and the accessories seemed right. Then came a picture of one of them bent at the waist to pick something up and I realized that she didn't have stays on and neither did the other two women! They were all slim, so nothing was bulging awkwardly or curving in the wrong places, but the gowns didn't have that nice straight back or anything solid to smooth against and it made all the difference in how the gowns hung and the ladies carried themselves. I appreciate 18thc undergarments so much more than when I started sewing, and will never again go without them in a gown!
Posted by Anna at 8:01 PM 2 comments:

A project most common

My birthday was a couple of weeks ago and with it came time with friends and family that has kind of cut into my sewing...but that's not a bad thing! Hand-sewing alone at home is my way to unwind from a day of working with the public as a librarian (you would not believe the requests we get...ranging from "can you help me find a washer on craigslist?" to "would you write my resume/essay/thesis for me?"). Still, it's good for me to remember that I can also recharge myself by being with people who love me, so I enjoyed my time away from projects.

Last night though I did finish the accessories to go with my lower-class outfit. For re-enacting, which I wish I could say I do a lot but it's really only in the summers, I have what I think is probably an upper-class undress/day gown for the mid 1770s (a 'quarter-back' gown, for lack of a better term for the back seams) in a pretty pale rose color with a maize-yellow petticoat, as posted earlier in this blog. I also have a middle-class, probably linen-blend gown in yellow with blue and white stripes, which is now on its 3rd life and has undergone some pretty drastic alterations....it's turned out nicer the more it was altered, and will get its own post sometime after this one.

But a good lower-class (and I don't mean grimy drudge...just farmer's wife having to make ends meet) ensemble was kind of eluding me because I was having a hard time picking convincing accessories. After looking through a lot of 18th century art in the Lewis Walpole Digital Image Collection and browsing through other costumer/re-enactor suggestions and photos on blogs, I realized that solids are all well and good, but they can look boring and two-dimensional without some patterns mixed in. Then again, correct fabric prints can be such a stumbling block for re-enactors, so that was another consideration to weigh...do I want to risk accuracy for the sake of a print?

Luckily it became clear that while floral prints are sooo easy to get wrong, stripes and plaid ("cross-barred", I think the pattern was called) are a little harder to mess up and are quite common in art prints of the time. I really seized on this art print in particular for some of the outfit's inspiration: 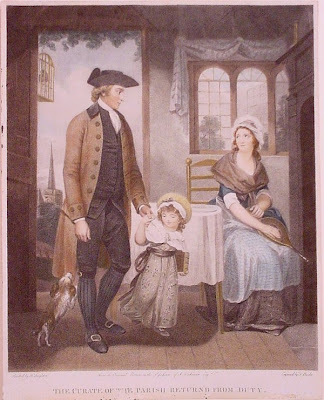 "The Curate" from the Walpole Collection

This print is, to me, a lovely example of lower-middle-class; I hesitate to say "lower class" because they look clean and comfortable, and because country curates usually had enough of a living to keep them from being destitute. However, the colors of the fabric are also rather sober and plainer than I'd expect of upward-trending middle class, and the lady of the house is doing her own fire-starting rather than having a servant to do so. I already had a blue jacket, and made up a grey linen petticoat to go with it. Also in my stash was some blue and white plaid...but sadly not enough for an apron! It became a nice kerchief instead. When I went to Hancock to see if I could find something suitably patterned for an apron, my life got a little harder...NO blue and white checked or plaid fabric. A light-pink check was the closest I could get, and after some consideration, it'll do.

So I think for one of the Rendezvous days I'll do my errands and cooking in a white cap, dark blue corduroy jacket, gray linen petticoat, check apron, plaid kerchief, medium-blue stockings, and probably boring black shoes. I put my blue silk Georgies on...but they're just a little too frivolous still. Maybe if I were a servant running away with stolen clothing from my mistress, they'd work, but I just don't feel like I could justify it now since I'm clearly not even in "Sunday best." So I will have to take a picture of the outfit later...my camera is out of batteries!
Posted by Anna at 11:23 PM 3 comments: