Wow I have had a case of the summer lazies, bigtime.  I haven't even attempted any projects since the first weekend of June, which was when the biggest 18thc event around here was held -- the Rendezvous. There are always a deplorable number of the ole grizzled mountain-men types with their amazingly Caucasian-looking squaw wives making Hamburger Helper meals in the skillet, but I do think it's improving little by little. The actual context is a range from 1720-1820, in an area where the French first settled and established a series of forts along the Mississippi, then the English came and took over, and Americans filtered in after that. So it certainly allows for a lot of re-enacting leeway (still doesn't excuse Plains teepees and slovenly looking wenches in chemises, paisley drawstring skirts and bare feet, but that doesn't stop some people. Sigh.). 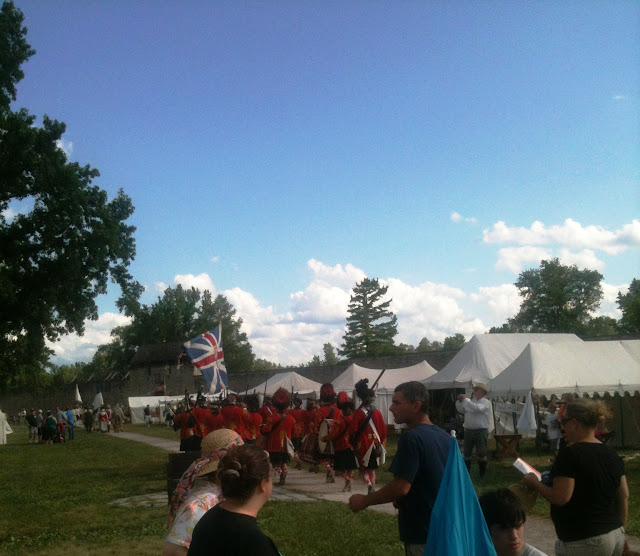 The weather was so beautiful this year compared to last year's, which was in the 90s and 100s and humid as a sauna. In fact, it was downright chilly in the evenings and early mornings! I was so glad I had brought my mitts and heavy wool wrap! I did a lot of sitting by fires until the sun was up and going. I didn't make a fire near my tent because I figured I'd never be there to watch it anyway, so I wandered around until I found friends with fires. Friday I wore my grey linen petticoat, navy blue jacket, and pink-checked apron, and was very cozy with my grey mitts. 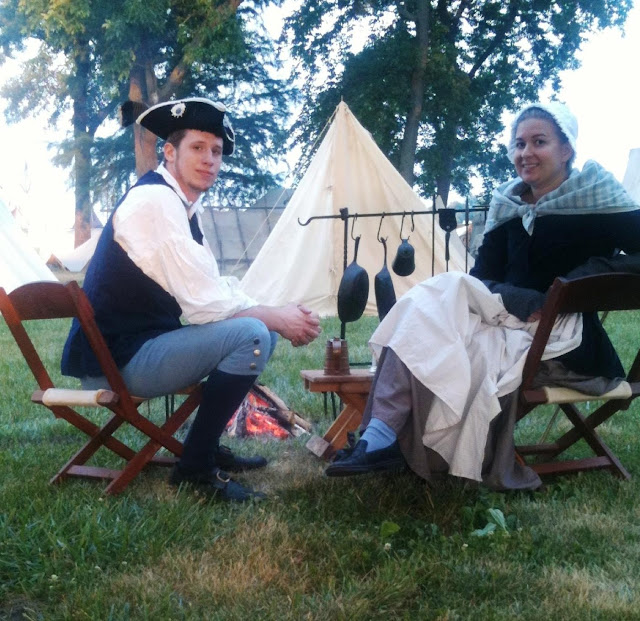 Mr. E and I visiting while we wait for the day to warm up

My wretched Simplicity gown came out of the closet again, although the addition of cuffs, a better stomacher front, and polonaising it made me much happier to be seen in it than last year, or the year before. I'm hoping that when I get another gown done this fall, I can retire the Simplicity yellow gown for good. It's just got a lot of structural issues that I cannot fix because I haven't got any more of the fabric. It is some sort of nice linen blend and feels great even on hot days, but the sleeve seam in particular is in the wrong spot and the back is a hideous faux-fourreau. The linen is really too limp to polonaise but I've already hemmed this thing like five times and wasn't about to do it again just to get it off the ground. I had a quilted "puffer petticoat" that made it stand out a lot better but I got too warm by the afternoon to keep it on. My pretty painted Devonshires were on but I didn't get a good shot of them in action. They stood up pretty well to all the grass and gravel with just a few nicks in the leather. 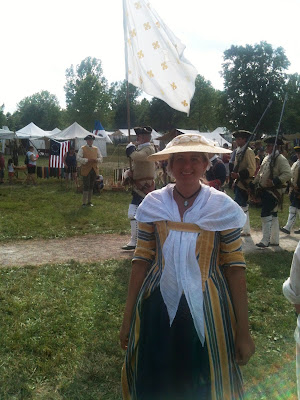 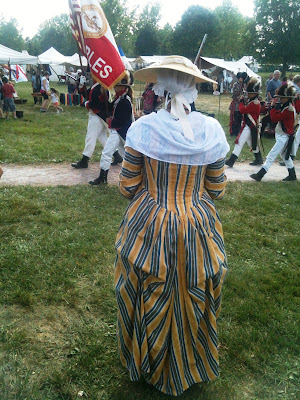 But I did get invited to be in the "fashion show"! So excited! They put me up with a couple of other ladies of various stations, and a really knowledgeable young woman, whose name I forgot (Kate, maybe?), gave a lovely talk about what clothing would have been seen and on whom. I was so grateful for many of the points made during the show, like if women went without stays which was rarely, they would have worn a bedgown, that men just did not do anything without waistcoats unless they were laboring, and that the Indians in the area did NOT live in teepees and wear full Plains headdresses. Hopefully the visitors who attended then went away and looked at some of the more stubborn "old-timers" who refuse to change and maybe asked them some questions like "why are you dressed like such and such? we just heard that they didn't do that here."  There were definitely some fantastic Indians who were part of the fashion show, and they were so well researched as to their clothing, facial markers, head feathers, and accessories. I was really impressed by them and so was Mr. E., who is determined to be an Indian next year, and got in contact with one of the guys. Guess I get to make him a new shirt with a print on it...HE can go live over in the Indian camp and I will stay on the respectable side of the fort with the other palefaces. 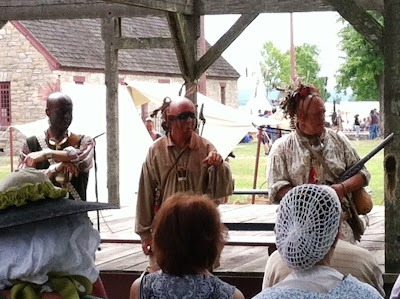 The final day I wore my new pink gown, which, while pretty, was HOT. No more heavy fabrics for me. Parasols, I found out recently, were definitely in the area about 1730-40, being mentioned in a will, so heck yes I was gonna carry mine even if perhaps the shape isn't quite right. I was tired of being in the sun. And I wore one of the little miniatures I made, so fun! And no neckerchief because I was a hot cranky loser. 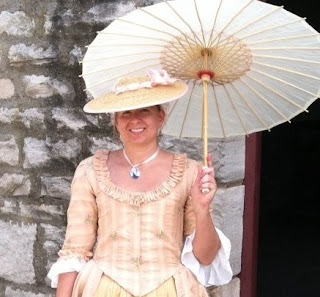 And I got to be in the fashion show for the second day as well! The young woman again narrating the women's section looked down at my pink silk-clad feet, paused in the middle of what she was saying, and said "Girl, are those American Duchess shoes?! Hot dog!" I had to giggle that out here smack-dab in the Midwest, Lauren's lovely shoes have gained notoriety already! 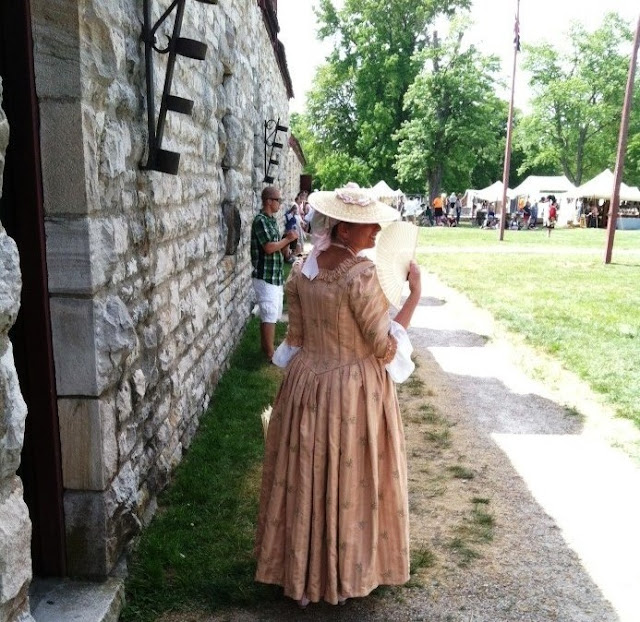 I had a really lovely time and got pictures taken a lot although I apparently ALWAYS smile like a chipmunk on crack, sigh. Will have to make my goal for next year to smile in a more civilized and mysterious manner. 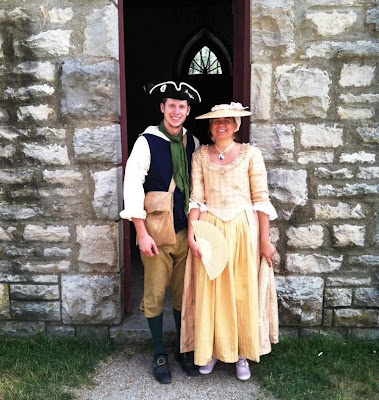