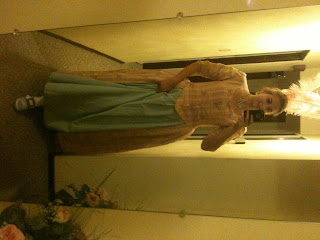 It was a bit crinkly at the end of the night, and I didn't have time to make a complementary petticoat so I went with an old one...but my beautiful Georgies from American Duchess are still some of the most comfortable shoes I've ever had to stand in. 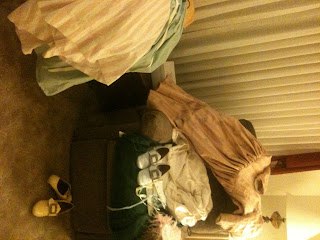 Oh dear me. My living room was an absolute 18th century closet explosion by the end of the night. 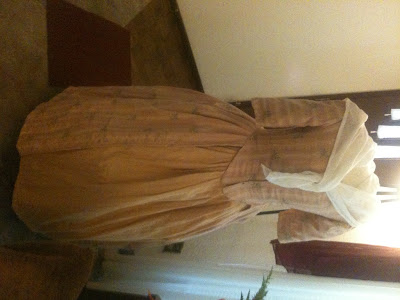 Here the dress is back on the duct tape dummy, this time I realized that my maize yellow petticoat would have gone nicely with it for Halloween, oh well. It's hard to see but the small stripes of the gown are almost the same maize-y color. 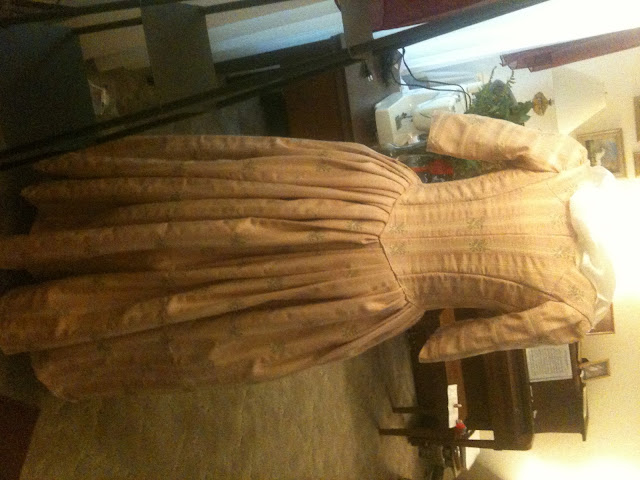 Annnnd the back in its matchy-print glory. I am really proud of how it lined up, considering it was my first time ever A) handsewing an entire gown, B) lining a gown, and C) drafting a gown from a scaled down version with NO PATTERN. I never thought I would be able to say that and so I keep the gown up in the living room to smile at every time I walk through. The fabric really is too heavy to look right, but that's what I get for raiding the upholstery remnants table at Hancock! Good practice though.


I sort of bought some fabric last night. Like, 7 yards of it. The quarter back was actually easier than I thought, so I am going to try an en fourreau...eeks. This dress will be for more of a lower-middle-class impression, I guess, because the weave of the fabric is quite coarse and visible and has imperfections in it. I definitely need something less fancy for Rendezvous because it's so camping/frontier based, and while apparently some of the French citizens of nearby Prairie du Rocher were sending back to New Orleans for silk shoes and stockings and some of the existing wills at the county courthouse show silk dresses listed in the household inventory, everyday dress must have been extremely durable for getting muddy (it was very marshy) and cooking over fires and doing chores. So this will be my firewood-gathering, water-hauling gown, I suppose! 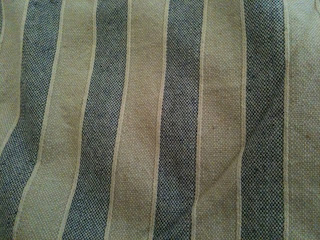 Obviously the stripes will be vertical down the dress. All the stripes, even the lightest white, are woven in, not painted, and at first I wasn't sure about the coarseness of the fabric but I had a folder with me of things I've copied from various books, and there are some very similar weaves and patterns in the 18th century section of Florence M. Montgomery's Textiles in America, 1650-1870 so I feel that it's not too modern or too common a fabric to use for a commoner's working gown. The stripes are about an inch wide, which I think is also fairly accurate for use in the mid 1700s. I don't relish all the draping it's going to take to get the pleats looking nice and the stripes matching evenly, but I am super excited about a new project.
Posted by Anna at 5:10 PM