Summertime, and the sewin's crazy

Ok I have been sewing like a house afire for the past month or so, and the big event around here is over now so I can feel justified in posting again, but I'm going to go light on words and heavier on pictures because I don't feel like a bunch of essays today...here goes!

First up -- my blue and white striped en-fourreau's first outing, done up a la Retroussée dans les Poches if I've got that right. Fancy way of saying it was really wet and muddy and the gown is WAY too long so I pulled it up through the pocket slits. Also I had a hemming disaster where the sleeves were too long before and then TOO SHORT after I re-did them *shakes fist at sleevils*. That's ok, I'll just put cuffs on them later, but here I am showing my elbows in an unladylike manner. 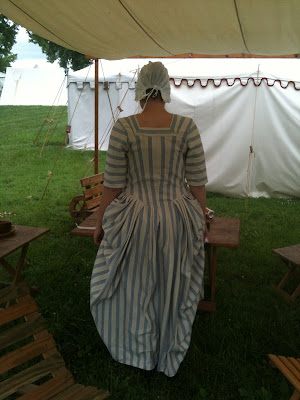 Please excuse the un-period correct chariot in the background, people were setting up and I was anxious to get down to business and finish Monsieur E's coat. He set up camp even though neither of us intended to stay down there this year, just because it's nice to have a "home base" and a canopy to sit under in case of rain or too much sun. 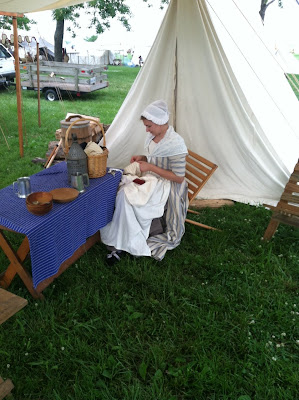 Here he is chopping wood in a manly fashion...wearing an apron. I told him if I was going to go to all the trouble to make him nicer clothes than his terrible buck-skinner outfits, he was going to have to protect them. 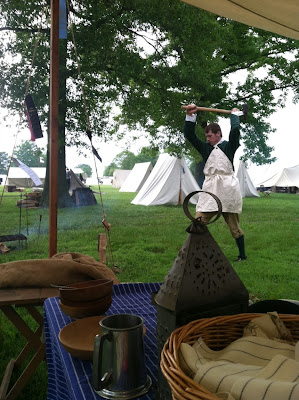 I don't know, maybe it's just me, but the apron kind of suits him, really... 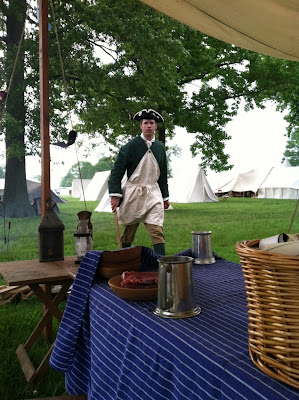 He looks a little dazed here but I think I just caught him off guard. The coat held up very well during an ultimately really wet and filthy weekend, so it was worth all the hours of sewing boredom. I was so glad not to be staying down there; a storm came up overnight and blew over a lot of people's tents and the whole area flooded, several inches deep in a lot of places! 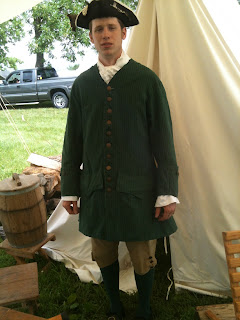 And here is his finished ivory coat in all its Simplicity glory...it didn't turn out too badly although it's a little shorter than I would have liked it, but shhh he doesn't have to know that. I'll have to put pockets in at a later date. At least with added cuffs the sleeves are long enough, thank goodness, the poor guy is built like a daddy long-legs in his extremities. I'll try to find a picture of the back later, it turned out great after a lot of agony. 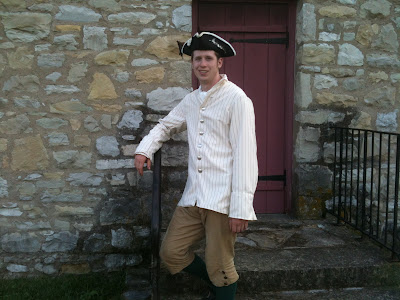 And here is my sassy Curtain-Along Lowe's Felicite petticoat! I love it so much. I have shied away from prints so far, other than stripes, and mourned as I envied other girls' lovely floral things, so it was just a dream come true to get to have a little flowery-ness this year! 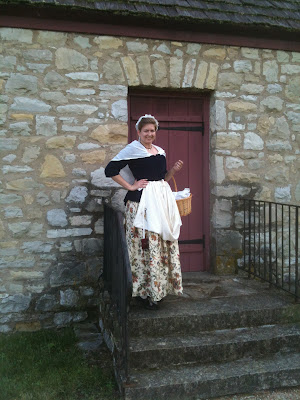 My little Burnley & Trowbridge embroidery scissors, antique key from Etsy (I think it actually IS 18th century by the style!), and further down my maroon pincushion. And filthy apron. 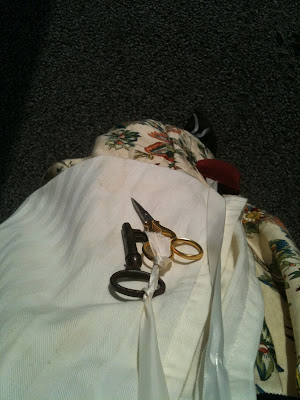 Ok, a glowing tribute to my poor abused Pompadours -- these long-suffering shoes slogged through mud, grass, and ankle-deep swamp for two days straight, and while I know they weren't meant for that kind of use, they held up PERFECTLY. I had waterproof-sprayed them before the event and the mud has wiped right off, so I'm very happy with them. Although the ribbons will be getting a sad burial. 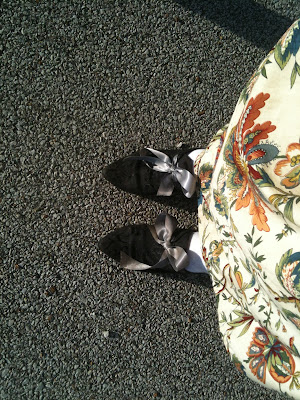 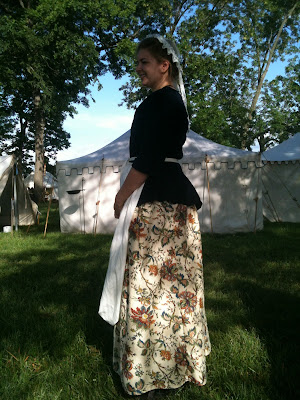 My jacket makes me look so wide from the back. I thought dark colors were supposed to be slimming! :(  Also I'll try to do a post some other time on my little pinner cap, it needs some adjusting so the lace lappets hang correctly but it turned out really cute. 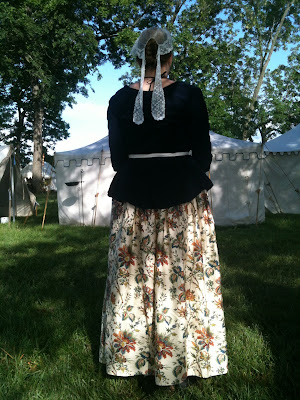 Also I just bought this unbelievably gorgeous upholstery fabric on Etsy that I am SO excited about. It looks so much like crewelwork. I can't decide whether I want to make a stomacher out of it or cover a pair of shoes with it. If there had been more than just a little square of it I'd have broken the bank getting it. So cool. 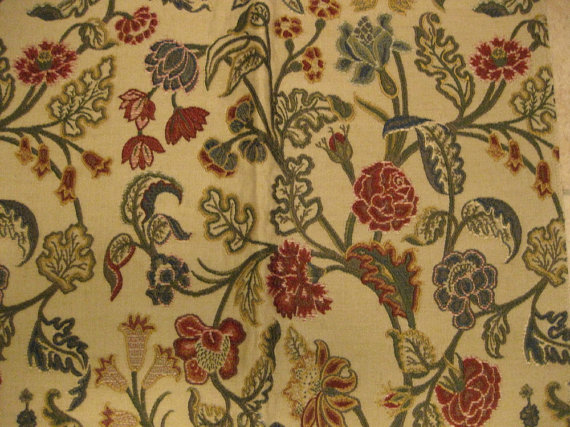 I also bought some really pretty gold striped, airy silk that I think will make a lovely polonaise, and I'm working on a woman's wrapper or dressing robe right now...more projects to come!