Ok, I'm trying to convince myself that I can do this:

Kendra is inspiring crazy seamstresses everywhere to make Court Gowns, and I was sitting back and shaking my head at all involved for a while there. See, I have very little confidence in my sewing skills. My projects have been turning out a little more polished and advanced each time but when I look at what other people are doing, I feel inspired, overwhelmed and inadequate all at the same time. Plus, being an extremely poorly paid librarian, I feel terrible buying expensive fabric and not sewing from my stash of bargain fabrics and tablecloths.

Last Saturday though I went to the local thrift store for a sweater and found 14 yards of a dusky-blue silk-like material with a visible weave to it, I think it's maybe what would have been termed "tabby" in the 18th century. For only around $5 for it, I took it home and subjected it to a burn test, which was strangely inconclusive. It melts like a synthetic in that it doesn't make a nice soft ash, which I wasn't surprised at...it seemed too good to be true that it'd be actual silk. However, it did not "catch fire" and keep flaming when I took the lighter away from the scrap, so that doesn't quite fit with the supposed profile of a synthetic. Could it be a half-and-half? Is that even possible?

At any rate, the fabric is really pretty...it's not super shiny, it's subtly changeable, and not at all slubby like dupioni. The weight of it is light, but not flimsy. It's got some definite body while not being heavy. It looks like it could hold a crease but won't unnecessarily wrinkle much. Ideal for a robe a la francais in my opinion and I'm willing to use a synthetic for the first time I attempt anything with this much fabric, especially before shelling out big money!

My inspiration is a gown I've drooled over for a while, a portrait of Catherine Havers by Barthelemy Du Pan: 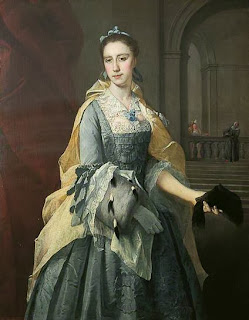 It's dated 1735, but it looks later to me! What do I know though. My fabric is close to this color in daylight, and while the gown isn't as over-the-top as a full-on court gown, I'm thinking about making it to fit over bigger paniers or at least large pocket hoops. Also I've always wanted to try fly fringe, and have a gown to be dressy enough to merit lace and satiny accessories, so this is my chance! And it's not "due" till next summer! I am telling myself: you have made three gowns already by drafting them from sketches, and a rough pet-en-l'air a la Chardin's Governess...you can do this!
Posted by Anna at 9:47 PM