So as crummy as the first half of my year was with losing two beloved pets, a delightful new opportunity has opened up for me and I'm enjoying it tremendously. Fort de Chartres, the big French stone fort about half an hour from me, has been looking for volunteers so that it can open its little trading post at regular times when the talented and incredibly knowledgeable Fort gardener Carol (see the Jardin Potager site for her well-researched work) is around, or the Les Amis du Fort de Chartres is having a meeting, and/or the gun club is having a shoot in back of the fort. 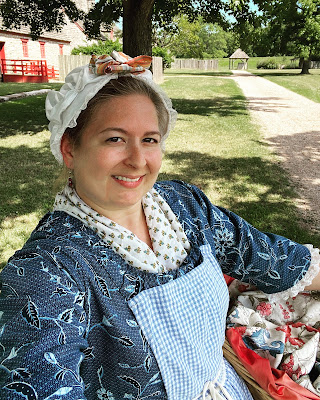 Me with my basket of sewing... I got most of my Burnley & Trowbridge wrapping gown sewn on that day! You can see the bake oven under the canopy in back.

I first got to volunteer in the Trading Post during the summer Rendezvous, and I jumped at the chance, because as much as I like setting up camp and sitting under the fly watching the passers-by watching us, it's not the best opportunity for talking history to people. Most visitors are a bit wary of interrupting people in the camps and it's more of a tourist viewing experience than a history-learning opportunity (...plus uh some of the 18thc 'history' being portrayed is a bit dubious in some camps... I see you, flour sack 'blouses' and cabbage-rose Victorian skirts 😂).

I've read a LOT about the local French colonial history, and understand some of the nuance and complex interplay between the French colonists, the local Native tribes (the more settled tribes were the Metchigamea with a village very close by, the Tamaroa, the Kaskaskia, and the Cahokia peoples, but there were others who would sweep in to war with and raid the settled tribes), and the enslaved Africans brought by the French. But I'm not comfortable calling myself a full-fledged interpreter just yet, and am still learning from people who have been doing it for a while. I don't want to cultivate a single persona at the moment -- although I hope to pursue something along the lines of one of the few women who made it here from France -- most of the women married by the male French settlers were either Native or were hardy French-Canadian women who had a generation or two of the New World underneath them.

So in that regard, staffing the Trading Post is ideal for me, because I can share some of what I know, but being in a building that sells modern coffee mugs and t-shirts with pictures of the Fort on it, nobody's going to mistake me for some kind of expert, haha! The Trading Post is also not an original historic building -- the buying and selling would have been done out of one of the governmental structures on the property: large, long stone buildings that also housed offices, soldiers' barracks, grain and goods storage, and more.

But I so enjoy having the chance to dress up and go down with a purpose. It doesn't hurt that the Trading Post has air-conditioning because it is extreeemely muggy down at the Fort when hot, since it's in the rich 'American Bottom' area, near the Mississippi River, bounded by tall bluffs on either side (and no breeze, like, ever). 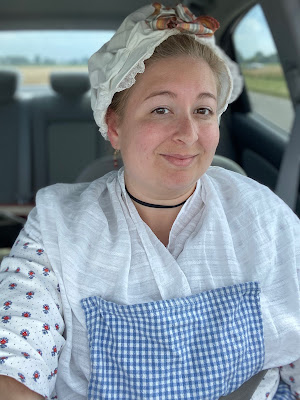 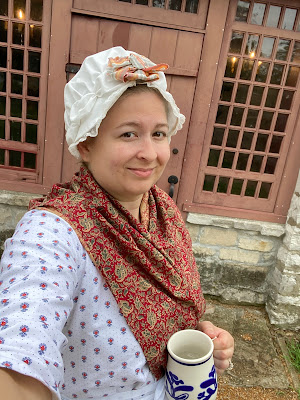 Kinda looks like I'm outside an 18thc tavern, but no such luck, just my workplace for the day, haha. 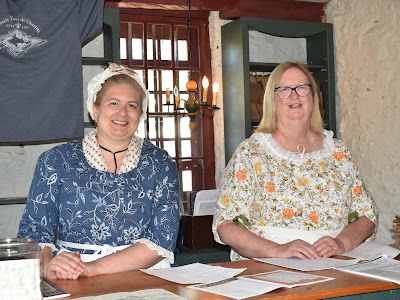 Volunteering with Keni, a sweet lady with Friends of the Fort 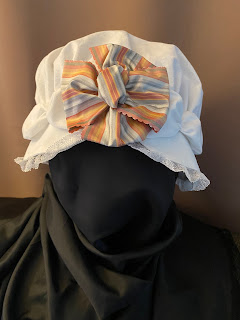 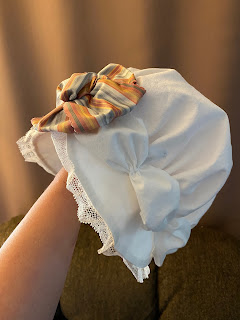 I've been kind of wearing stuff I already had, but I wanted a cuter cap, so I made the JP Ryan Dormeuse in cotton (I have a fancy sheer one in silk) and it's been serving me well.

For Rendezvous, I did bust out the cotton sacque for the first time in a couple of years, and it was so sunshiney-looking that people loved it! 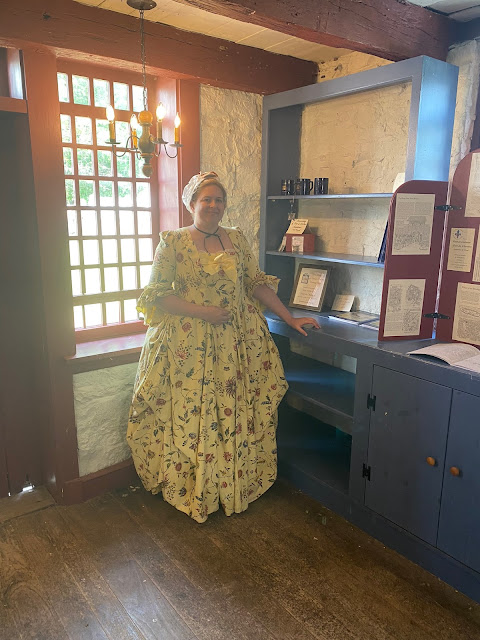 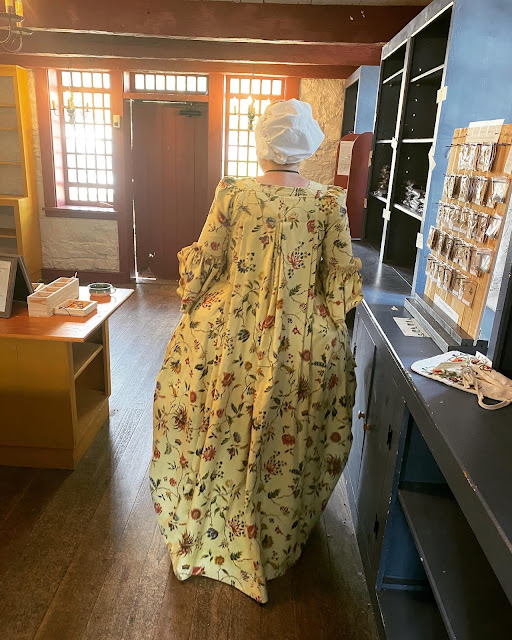 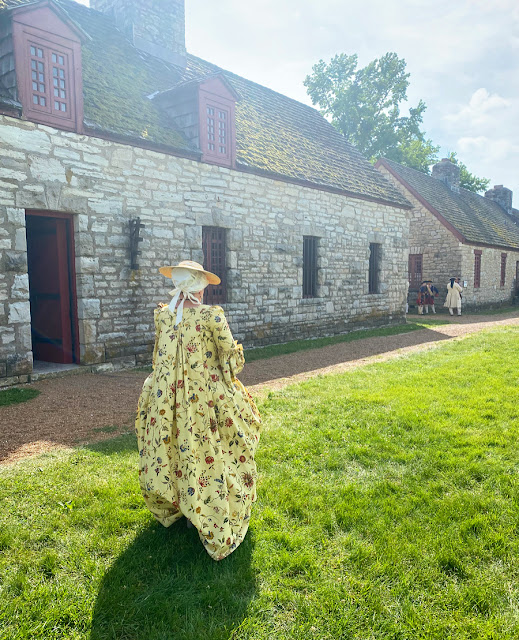 Never quite ready to go home at the end of the day... these are the times I wish I could just stay in 18thc clothing for the whole week. 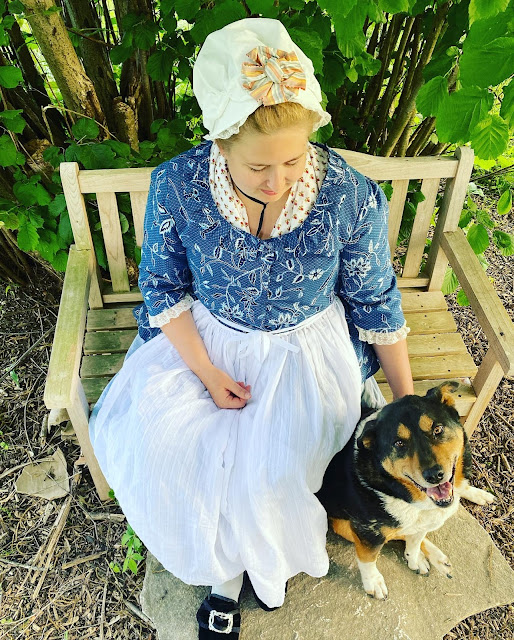 Oh! I forgot! I did make the shoes above. Knowing I might need to be on my feet all day, and having a bad ankle and bad knees, I wanted some super flat, super comfy, 18thc-passing shoes. All I had to do was cut out uppers (from black velvet, in this case) with latchets that would work with shoe buckles, and I sewed them onto the all-fabric-upper of some Target memory-foam flats. They have been great so far and I wish I'd bought a couple more pairs so I could make more cloth shoes!
The original shoe: 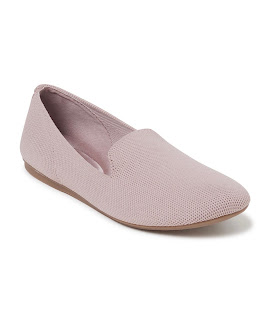 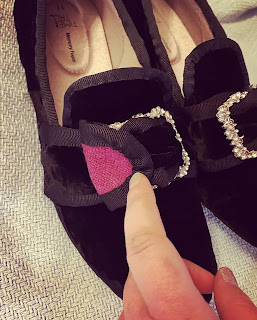 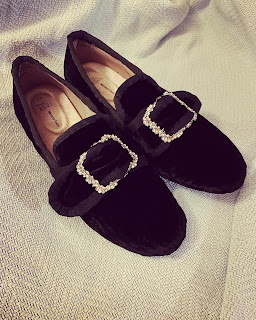 Eventually I swapped these buckles out for some non-bedazzled plainer silver buckles, but you get the idea. Everything's bound with black grosgrain ribbon, which works out great for going around curves. Very comfortable, very easy, only took me parts of a weekend, really!